Underlined terms are explained in the vocabulary section below.

Santa Claus is not so much a person as he is an idea, but this idea started with a real person many centuries ago. Around the world, “Santa” has many names: Santa Claus, Sinter Claas, Saint Nicholas, St Nick, Kriss Kringle, Father Christmas, 圣诞老人 (literally: holy birth old person) and many more. But the first “Santa” lived in the 4th century; he was a Christian leader named Nicholas, living in what we now call Turkey. After his wealthy parents died, he spent his life secretly doing good things for others, especially children, the poor, and sailors. He was later honored with the Christian title “Saint,” and thus became St. Nicholas.

Like many governments before and since, the leaders of the Roman Empire considered Christianity to be a threat, so St. Nicholas and other Christian leaders also spent many years in jail because of their deeply-held faith.

One of the most famous stories of Nicholas’s generosity is about a poor man who needed a dowry for each of his daughters. When it came time for the oldest daughter to marry, Nicholas dropped gold coins down the poor father’s chimney, and they landed in the daughter’s socks (which were hanging by the fire to dry). Everyone thought it was a miracle. Money also mysteriously appeared the night before the next daughter was to marry. When it came time for his youngest daughter to marry, the poor man stayed up all night and discovered that the gifts had come from Nicholas.

By the time he died, Nicholas was so well known for secretly supplying needs (both to his fellow-Christians and to others who did not share his faith) that people were giving him credit for every unexpected gift. Later, his kindness was remembered with “the Feast of St. Nicholas” in early December, which eventually moved to Christmas Eve.

As Christianity spread from culture to culture, the man’s name was translated differently. In Holland it is “Sinter Claas,” which became “Santa Claus” (or just “Santa” or “St. Nick”) in America.

In each country, the character is a bit different. In Holland he has a tall red hat and uses a white horse; in the UK, “Father Christmas” is tall and slender; in Russia, “Grandfather Frost” has a red suit and white beard; in Germany, “Pelze Nicol” or “Kris Kringle” may wear fur or bells and arrive by mule or horse; in Sweden, “Jultomten” is a short elf (with a red tasseled cap and a long white beard) who rides a goat. In other countries, children say gifts come from the “three wise men” or some other character. Countries where the celebration of Christmas is relatively new (such as China and Japan) have adopted the American Santa Claus. 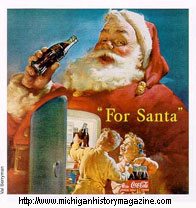 Who created America’s version of Santa? In the 18th century, Major Henry Livingston Jr. (1748-1828) wrote a poem giving a new magical dimension to the character of St. Nicholas. Livingston invented a flying sleigh, magic reindeer (and he gave them names!), and more. This poem was originally called “Account of a Visit from St. Nicholas”; it was later published citing Clement Clarke Moore as the author. Cartoonist Thomas Nast drew pictures based on the description in this poem, and both the pictures and the poem became very popular. Livingston’s poem, Nast’s cartoons, and popular Coca-cola ads (created by Haddon Sundblom from 1931 to 1964) turned “St. Nicholas” into the “jolly fat man” Americans now celebrate as “Santa Claus.”

Wherever he is remembered, and no matter how you picture this jolly gift-giver, “Santa” has come to symbolize generosity at Christmastime all over the world. 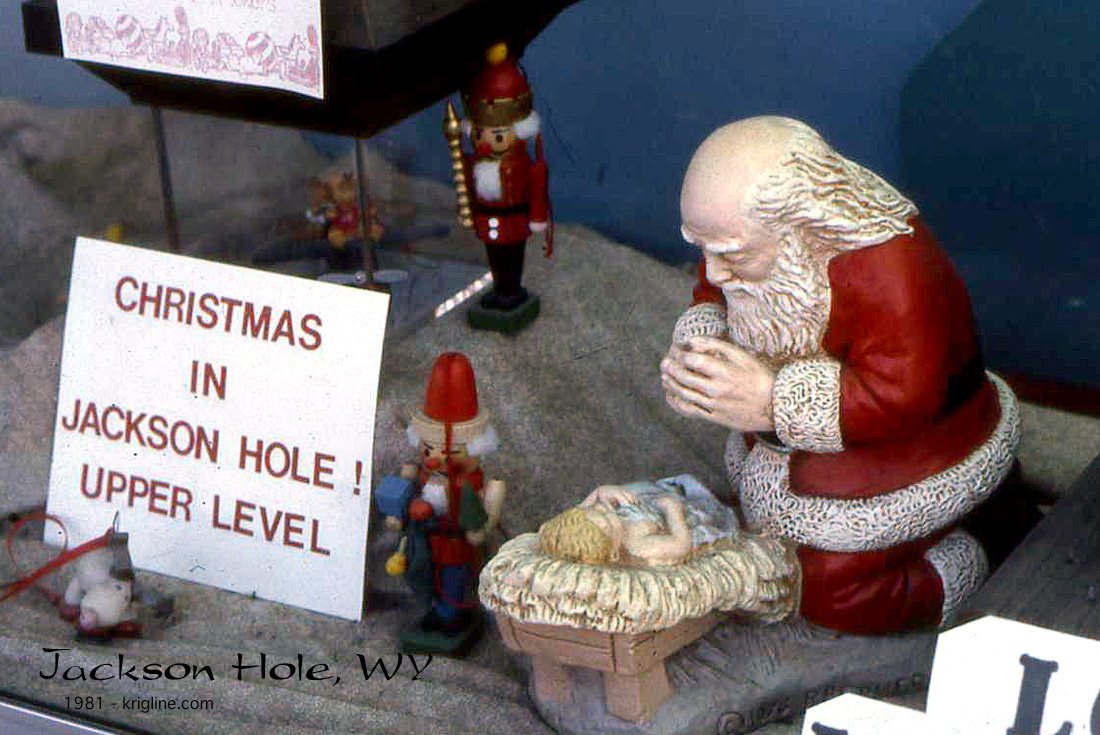 In 1981 I was working in Wyoming, and snapped this photo of a Christmas gift-shop window.  I’ve always liked the image of “Santa” worshipping the Christ-child, and I think St. Nicholas would have liked it too!

Is Christmas about Santa or Christ? Although many people now associate Christmas with Santa, historically, the holiday celebrates the “holy birth” of Jesus Christ. (You can learn about this historical event on my other website: http://wp.krigline.com/christmas/.) It is strange that folklore would take a man known for secret Christian generosity and eventually lead millions of people to think that he (Nicholas) is what Christmas is all about. Nicholas did what he did out of love for Jesus Christ.

Some ask if “Jesus” isn’t a lot like “Santa”: a historical figure exaggerated by legend, who appeals to naive children, who eventually “grow up” and stop believing in the mythological figure. While it is true that children eventually stop believing in Santa, I’ve never heard of any adult who starts believing in the mythological gift-giver. However, the account of Jesus’ life/teaching/death/resurrection has spread throughout history like wildfire among adults — not children. Remember that by the 4th century, the mighty Roman Empire put Nicolas and other Christian leaders in prison, fearing the threat of this growing faith. “Christianity” grew across the Roman Empire, and into Africa and Asia, as adults claimed to find peace and worth through a resurrected man, not by forced conversions among conquered people (though “Christians” have been guilty of such unChristlike force later).

Napoleon, the Emperor of France/Europe, said late in life: “Alexander, Cæsar, Charlemagne, and myself founded empires. But on what did we rest the creations of our genius? Upon force. Jesus Christ alone founded his empire upon love; and, at this hour, millions of men would die for him.” (translation from French) If you take away force, most religions would decline, but Christianity continues to grow to this day. It was no “myth” that transformed wealthy Nicholas into a humble, generous man; it was deep devotion to a real person who had changed his life for the better. And “Saint Nicholas” would say that this same historical person is still changing lives for the better today. (But that’s a subject for a different article! See: http://wp.krigline.com/christmas/.)

Note: For more information about Christmas, see these Christmas pages (underlined topics are on EFLsuccess.com or Krigline.com; others are on our older website): the traditional Christmas story, who is Santa (圣诞老人)?, candy canes, Christmas Perspectives (poem), and the pre-Christmas Advent season. Also look for Christmas wallpaper on our old website. You’ll also find movie study guides on this website (or our old site) for some great holiday films: A Snoopy/Charlie Brown Christmas, Last Holiday, White Christmas, The Grinch, Christmas Carol, It’s a Wonderful Life.

EFLsuccess.com; ©Michael Krigline, all rights reserved. Our resources were created for our students under my understanding of “fair use” for educational resources. As far as I am concerned, website visitors are allowed to print/copy these materials for personal or classroom use. For details, see our Website Standards and Use Policy. We also encourage you to visit Michael’s inspirational website: wp.krigline.com.

You are here: Who is Santa Claus > §-Holidays > 页-The Latest > EFLsuccess.com