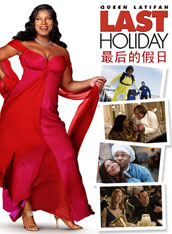 Story: Georgia Byrd is a “typical” (though “plus-sized“) African-American saleswoman. She works hard, but isn’t appreciated. She loves a co-worker but is afraid to let it show. She’s a great cook, but won’t eat her delicious meals for fear of getting too fat. At Christmastime, her doctor tells her that a brain disease will end her life in a few weeks. What would you do? News of her approaching death frees her to really live for the first time; her new boldness takes her on a dream vacation, where her common compassion changes everyone around her. This funny film will give you a glimpse of American life, and of the power of honesty and compassion. Oh, and there’s lots of food on screen, so don’t watch it when you are hungry! (110 minutes, drama-comedy; 2006; Starring Queen Latifah; Director: Wayne Wang; Paramount Pictures)

Note1: The first thing you hear is a lively African-American church choir; Georgia is in the choir and the director criticizes her for not singing as loud and lively as everyone else. Later you see that meetings at this kind of church are very lively! The people expect a visit on Sunday from a senator (politician), but he doesn’t come. Georgia later finds out that he is “playing” in Europe instead of doing what he promised the voters back home.

Note2: Since many of the main characters are African-American, you will see that they don’t always speak standard American English. For example, they use double negatives (“I don’t eat nothing like that” instead of “I don’t eat anything like that”) and sometimes omit “to be” (“Why you gonna send him here?” instead of “Why are you going to send him here?”). They also use some nicknames when talking to strangers (like “baby” and “killer”) that white Americans would not use.

Note3: I have changed or condensed some dialogs below so that English-learners can understand things better (this is not supposed to be an accurate transcript of the movie). Words in brackets [ ] are there to make a sentence grammatically correct; words in parentheses ( ) are explanations for the sake of English learners.

(I’ve moved the discussion questions into the dialog section, after each of three parts of the film)

(many are from http://www.imdb.com/, which is a great source of movie information; blue indicates a key dialog or sentence)

Discussion for Part 2  (about 1:06:47 into film, immediately after Georgia jumps from the dam)

Closing thought: Georgia achieved her dream, married the man she loved, became a respected member of her community, and perhaps most importantly she helped other people move out of “sub-standard” lives to become who they wanted to be. I would say that is a “good life”! But did you notice that part of what made Georgia special was that she lovingly helped people see where some of their bad choices had taken them (an affair with a married man, a “for sale” sign on the politician’s forehead, the rich man’s ego–always having his own picture on the cover of his magazine…)? True success isn’t just about reaching your goals, it is about “playing according to the rules,” doing the right things with your life, and helping others along the way.

Discussion for Part 3  (end of the film)

(This story starts at Christmastime. For more information about Christmas, see the links to Christmas pages on the bottom of the “candy canes” page. You’ll also find movie study guides on our websites for some great holiday films: A Snoopy/Charlie Brown Christmas, White Christmas, The Grinch, Christmas Carol, It’s a Wonderful Life)