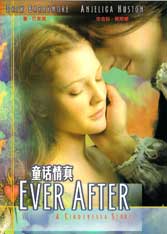 Ever After, A Cinderella Story, www.EFLsuccess.com

Story: Cinderella wouldn’t have needed a magic pumpkin if she’d had Da Vinci! France’s Crown Prince wants to run away from his overbearing father until a “modern-thinking” young woman captures his heart. But will 16th century rules and her evil step-mother keep these two apart? The young lady must overcome remarkable odds before she can wear a crown. (PG-13; Drew Barrymore, Anjelica Huston, 1998; 2 hrs; romance, humor, and a bit of history; 20th Century Fox).

Setting: In the 1800s, the Queen of France calls in the Brothers Grimm to “set the record straight” (give truthful facts) about a girl in one of their stories. That girl lived in the 1500s with her selfish step-mother and two step-sisters. The queen tells how the prince of France fell in love with this “cinder girl.

Note: In 1500s France, there was a big gap between social classes, and you could tell one’s class (or “station”) by his/her clothes and speech. You could get punished for “dressing above your station”—i.e., for wearing nice clothes or pretending to be in a higher class. This fictional story is set in history and in France, and a lot of the dialog has an upper-class French flavor. Therefore, the language is more formal than you would use in everyday English. Recommended for advanced English learners.

Synopsis: (you can find a partial one here: https://www.imdb.com/title/tt0120631/plotsummary#synopsis)

(these are special phrases or sentences in this film; the most common idioms are shown in blue, and quotation marks “ ”)

Note from an interesting website about the film and story: There are approximately 500 versions of the Cinderella story in circulation, making it the most famous tale in the world. The earliest apparently originated in China where the preoccupation with tiny feet found a highly satisfactory outcome in the search for someone who could wear an exquisite, small glass slipper. It has, however, usually been a story of a passive woman waiting for a strong, handsome (and nearly silent) prince to rescue her. Until now. According to the actress who plays Danielle: “In short, she is a ‘Cinderella’ for a new generation; She definitely is not a passive character,” adding as an afterthought: “Oh, yes. A prince falls in love with her!” [From: http://members.aol.com/gracefalls/story.html  (visited May 10, 2006)]

You are here: Ever After > §-EFL Movie Study Guides > 页-The Latest > EFLsuccess.com