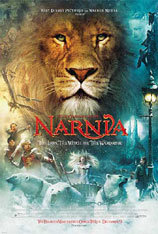 The Chronicles of Narnia: the Lion, the Witch and the Wardrobe
狮王,女巫,衣橱, www.EFLsuccess.com

Story: Four British children (Peter, Susan, Edmund, and Lucy Pevensie) go to the countryside to escape World War 2 bombing. There, they magically travel to Narnia, a land full of enchantment, epic battles and talking animals—including centaurs (half man/horse) and fauns (half man/goat) from Greek & Norse mythology. Jadis, the White Witch, has made it “always winter but never Christmas,” and she entices one of the siblings to join her side, even though it means betraying his brother and sisters. The ancient laws of Narnia say that whenever someone is treacherous his blood becomes the witch’s property (i.e., she gets to kill him on the Stone Table). How will Aslan, the rightful king of Narnia, deal with the traitor and the witch? And what will happen in the Civil War that follows? You’ll need to watch to find out!

The story is based on the beloved tale by Oxford University professor C.S. Lewis; his seven-book series has sold over 85 million copies (in 29 languages) since the 1950s. (The Disney film version is over 2 hours; fantasy/adventure, Oscar in 2006)

Setting: starts and ends in England, during World War 2, but most of the action takes place in a magical land called Narnia

Tagline: Some journeys take us far from home. Some adventures lead us to our destiny.

Note: You can learn more about Narnia and the Narnia films by looking at sample news articles I’ve copied from my book: Successful Writing for the Real World. 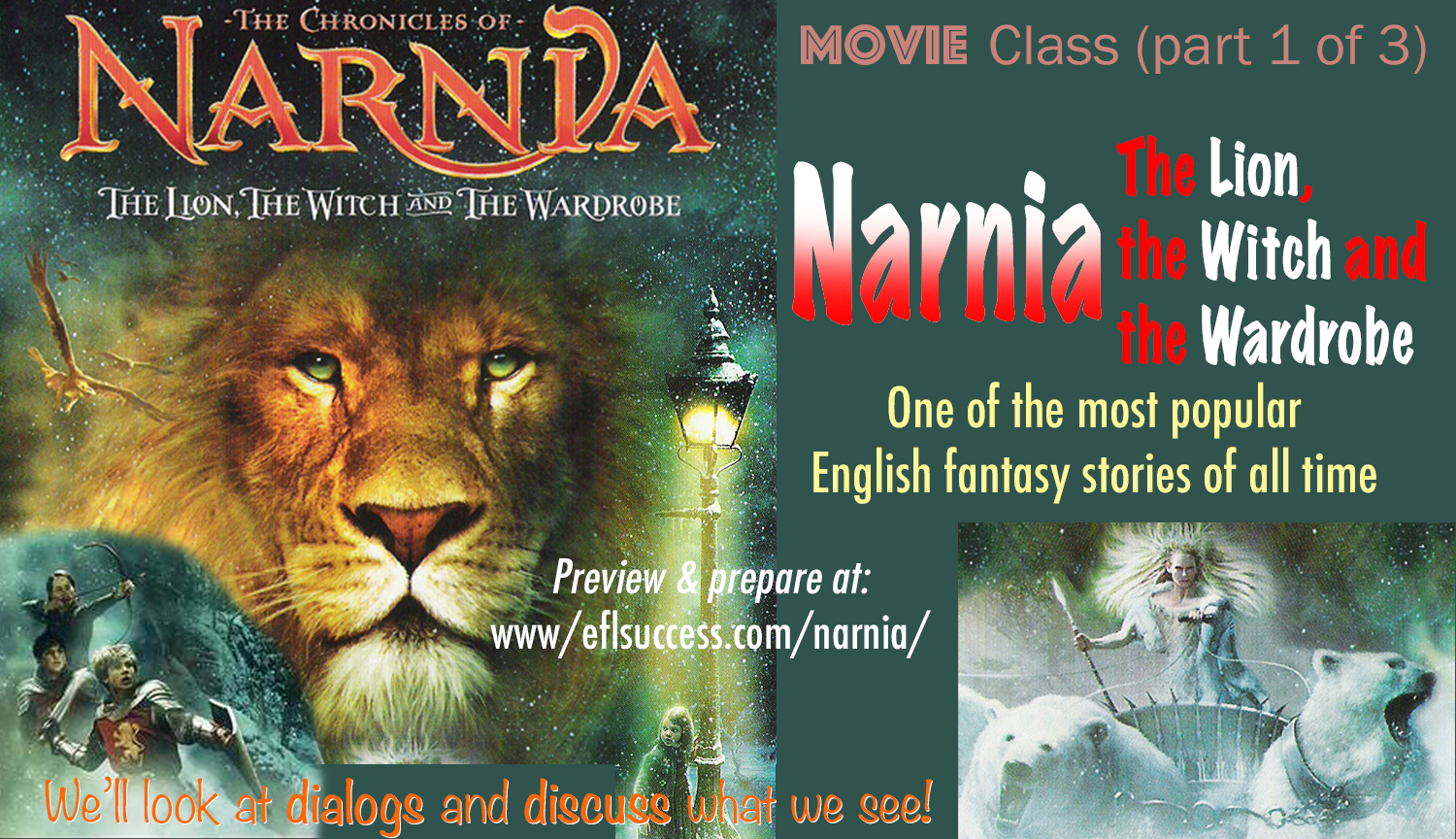 (many are from http://www.imdb.com/title/tt0363771/quotes; blue indicates a key dialog of sentence)
Part 1 ends at 47:08, just after Mrs. Beaver says: “I never thought I’d live to see this day.” There is not much time for discussion during the first class.

D7. This story starts in London, England, during World War 2. The city was bombed heavily. How would you feel if your city was being bombed? How would your parents feel? Did the parents who lived in London do the right thing by sending their children to the countryside?

D8. Put yourself in the children’s shoes. You know people “back home” will think you are lying or crazy if you tell about your adventure, so would you lie and say it didn’t happen (like Edmund) or tell people about Narnia (like Lucy)? Why?

D9. In Narnia there was a curse that made it always winter. How would you feel if it was always winter? What difference would it make to you if there was no Christmas or Spring Festival during the winter?

D10. According to the book this story came from, the children had different feelings when they first heard the name Aslan. Edmund felt mysterious horror. Peter felt brave. Susan felt as if she heard beautiful music. Lucy felt like it was the first day of summer vacation. What do these feelings reveal about their diverse personalities and virtues/sins? Choose a Narnia character (e.g., Aslan, the Queen, Mr Tumnus, the Beavers…) and tell your partner how you felt when you first met that character.

D11. At this point in the story, it is clear that Edmund was fooled by the White Witch’s beauty and generosity. (This is even clearer in the book.) But isn’t it normal to “trust” an important person when you first meet? Think about the first time you meet a teacher, roommate, colleague, boss, official…. Talk about the importance and the dangers of “trust” in modern life.

D12. Father Christmas gave gifts to the children in preparation for a battle–because he knew they would soon need them! What would you want him to give you? That is, what do you think you need to be better prepared to face the challenges ahead in your life?

Sentences/dialogs from the movie (part 3):

———Stop reading here if you want to be surprised when you see the end of the movie!—————

D13. What was supposed to happen to Edmund according to “the deep magic” regarding traitors? (See dialog 26)

D14. We don’t know why the witch was “the Emperor’s executioner,” but almost all people agree that society needs rules, and needs someone who enforces those rules. But—like Edmund—we are not normally punished for all of our mistakes, poor judgments, and other “sins.” If someone else—like Aslan—willingly took your punishment so you could “go free,” how would that change your life? Talk about how it changed Edmund.

D15. Is the story of Narnia an allegory? An allegory is a story in which the characters and events are symbols that stand for truths about human life. Explain your answer.

D16. Let’s talk about Aslan. What are some of Aslan’s traits that you like the most? Is there anything about Aslan’s actions or personality that surprised you? What did Aslan do that you liked the most? Does he remind you of anyone (who you know, or from history)? Explain.

D17. Many people think that “the Kingdom of Heaven” is like Narnia—it is “another world” that people enter if they are open to “believing” in something supernatural. Do you believe in Heaven? Why or why not?

D18. Peter and Susan didn’t “believe in” Narnia until the professor showed them that “logically” it could exist. If you don’t believe in Heaven, what would it take to convince you that it was real?

D19. If you do believe in Heaven, what do you think the rules are for who gets to go there? Who is allowed to make those rules? Where can people find out about these rules? (For a story related to this question, read my article about Mindyburg.)

D20. In what ways does this story teach us about forgiveness (宽恕)? The Bible says that forgiveness is one of the most important things in life, because without it we cannot have healthy relationship on earth, nor can we go to Heaven. How important is forgiveness to you? Should Aslan, Peter, Susan and Lucy have forgiven Edmund? Why or why not?

You’ll find two other pages about this Narnia story on EFL.success.com from Mr. Krigline’s book: Successful Writing for the Real World. Use the sample news articles to discuss what you learned about Narnia and the Narnia films. Learn about how to write a news article with “writing news articles.”

Some of the discussion questions were adapted from various websites; other sites can introduce more things about the story and it’s author:

For a fun activity, think about your favorite story, parable or myth, and rewrite it as if it happened in Narnia. For example, you could tell the story of “the prodigal fawn” (like “the prodigal son” or “Mr Ye loves centaurs”–like 叶公好龙).

Here are some passages from the Bible you might find interesting, along with chapters in this story:

See my Movie Study Guides for the second movie in this series (Prince Caspian), and/or read my devotional about Voyage of the Dawn Treader.

In March 2006 we rented a room in a Kunming Theater, and took a group of students and friends to see Narnia  (in English with Chinese subtitles). Afterward, we discussed the film over snacks!