Note to teachers: This “longer” two-part article would work well in a class about American history & culture;
for a “conversational English” class, you might prefer the “shorter” version linked here. Be sure to scroll down to get to the second part of the article.
Underlined terms are explained in the vocabulary section below. 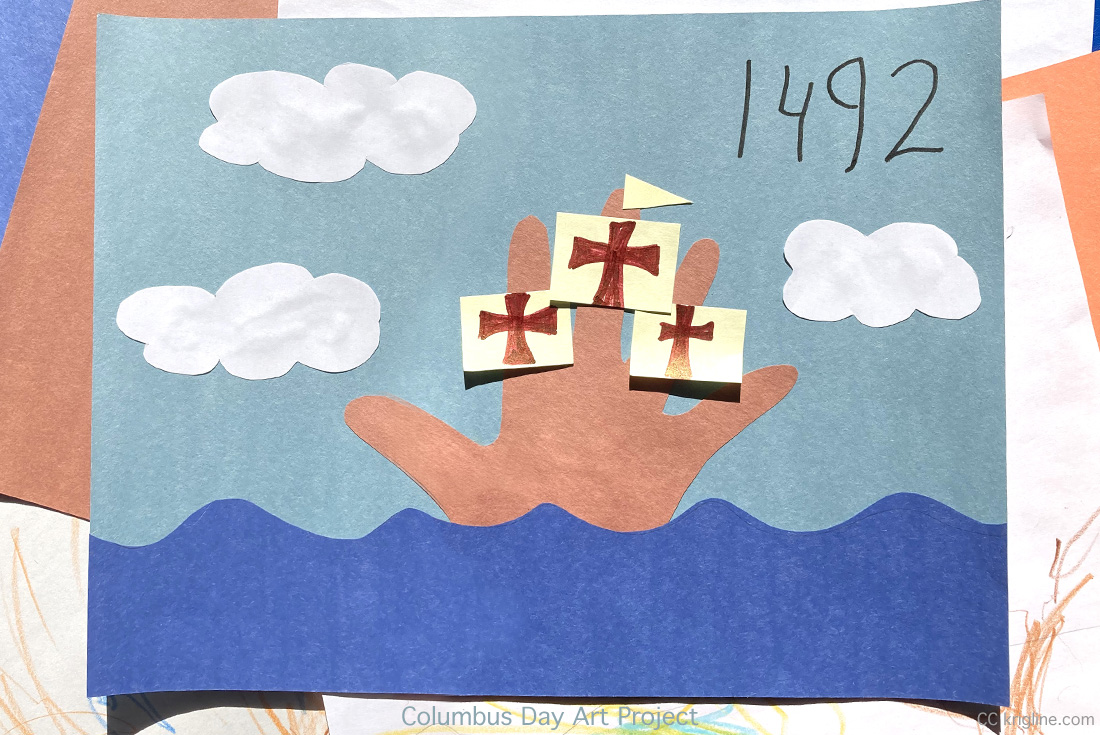 As school children, we learned the rhyme, “In 14 hundred, ninety-two, Columbus sailed the ocean blue.” Italian sea captain Christopher Columbus wrote: “It was the Lord who put into my mind…that it would be possible to sail from here to the Indies. All who heard of my project rejected it with laughter, ridiculing me. There is no question that the inspiration was from the Holy Spirit….” Columbus dared to think that sailing west would get Europeans to the East, i.e., to Asia. He was wrong, not knowing about North and South America, but his accidental discovery of “the new world” made the earth seem smaller and earned Columbus an honored name in history. But understanding history is a complicated endeavor, for what is “good” in some respects is often “bad” from another point of view. We’ll talk about the controversy over Columbus’ legacy in the next lesson.

But for now, we’ll talk about his positive legacy. Countless places, products and institutions bear his name, including Columbia University, Columbia sportswear, Columbia SC, Columbus OH, and Washington DC (District of Columbia). Since Spain paid for Columbus’ voyage, and because it opened the way for Spanish people to settle in central and south America, the date Columbus arrived in the Americas is also celebrated in some parts of Latin America, as well as Spain and Italy. 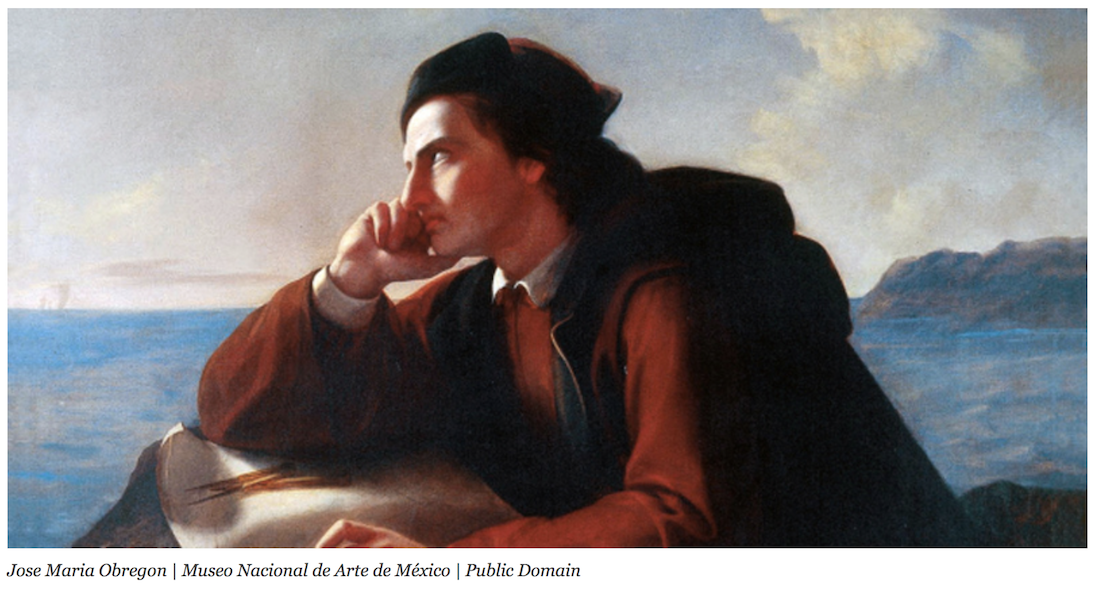 In the US, Columbus Day became a federal holiday in 1968, though celebrations date back to as early as 1792. For a long time, parades were very common. Many Italian-Americans celebrate their heritage by observing the holiday.

In 1992, to honor the 500th anniversary of his voyage, Spain spent 20 billion dollars on its festivities. Columbus’ hometown, Genoa, Italy, spent 650 million dollars on an exhibit called “Christopher Columbus: Ships and the Sea.” In many American cities, the annual Columbus Day parades were larger than usual, and the day marked the start of a year of commemorative events.

But controversies arising from the 500th anniversary also led to the decline of Columbus Day celebrations in America. Some cities and states have replaced it with “Indigenous People’s Day.” Somehow, the once-honored explorer was saddled with the guilt of bringing European disease and other evils upon the indigenous population of the Americas. We’ll talk more about that in our next lesson.

Today we’ll close with Drive Thru History’s summary, which shows how Columbus’ voyage made the world smaller: “Two Spanish monarchs commissioned an Italian explorer (Columbus) to survey what they thought was India and China, and then a German map-maker decided to call it America, the Latinized female version of the Italian explorer (Amerigo), whose name originated from the 11th century Hungarian Saint (Emeric).” The “science” of his day said a plan to sail west was “utterly impossible to any educated person.”  Columbus believed God had commissioned him to go anyway, and the world would never be the same.

Our previous lesson showed that Italian sea captain Christopher Columbus dared to sail west, trying to reach Asia in 1492. His accidental discovery of Central America made the world smaller, bringing him great honor. But history is complicated, for what seems “good” is often “bad” from another point of view. Toward the end of the 1900s, Columbus was blamed for bringing European disease and other evils upon native populations, and Columbus Day became “Indigenous People’s Day” in many parts of the US. 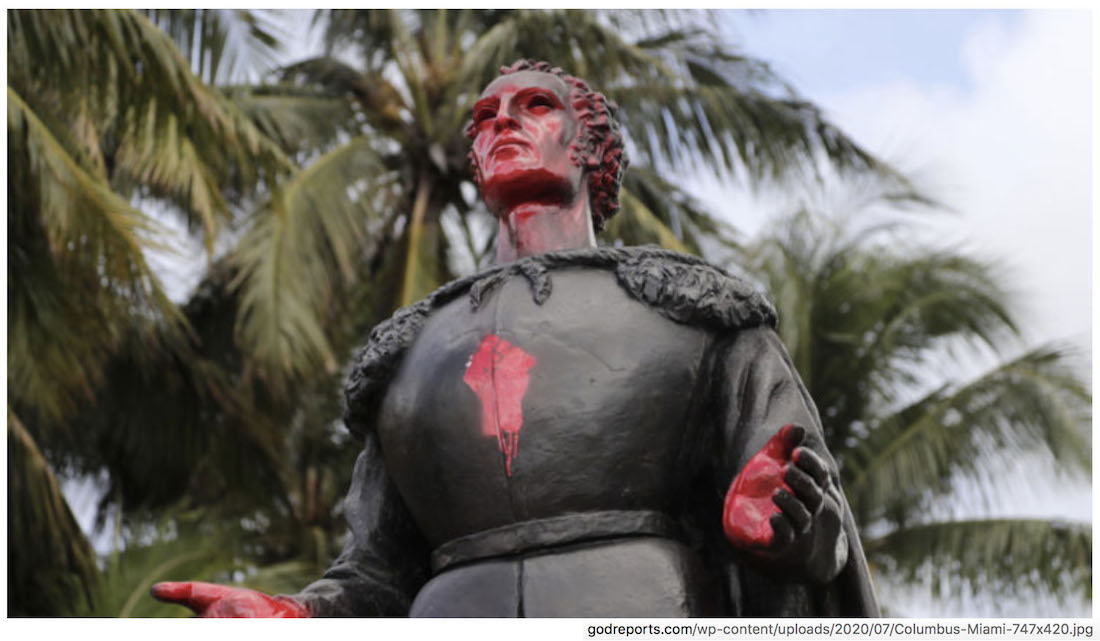 There is no question that Christopher Columbus had strengths and weaknesses like the rest of us. According to Stars and Stripes: “He was a skillful navigator, but he nearly lost control of his crew on his first voyage. He completed four voyages, surviving fierce winter storms, but he was mistaken in his belief that he had reached the Indies…. In the end, he was a cruel colonial administrator.” Although Columbus originally gave firm orders that indigenous people should not be mistreated, after he returned to Spain the crew he left behind raped and enslaved the natives, consequently introducing sexually-transmitted syphilis to Europe. On later voyages, Columbus is also connected with cruelty. And there’s no doubt that European diseases, a lust for gold, and the vices of colonization tragically decimated the indigenous population. A common protest on Indigenous People’s Day is that “This Land Was Stolen, Not Discovered.”

Yet history is complicated, with plenty of blame to go around. First, Muslim violence in the east prompted Columbus’ search for a western trade route. China’s vast Mongol Dynasty (though ruthless earlier) had produced safe trade across the Silk Road, but Islamic jihad brought widespread bloodshed between China and Europe, as well as in Spain and northern Africa, making trade impossibly dangerous. Meanwhile, (quoting Stars and Stripes again) “cruel behavior was not new in the Americas. The Aztecs and Mayans of Mexico practiced human sacrifice and held slaves. The Caribe Indians in the Caribbean islands were cannibals.” Many indigenous tribes were fierce warriors, both before and after the Europeans arrived.

The Europeans did not intend to introduce deadly diseases in the Americas, any more than native Americans intended to unleash the danger of tobacco upon the rest of the world. At the same time, colonization (in spite of great abuses) brought life-saving foods like the potato to Europe, while Europeans brought the horse and other benefits to the Americas. And few would say that cannibals were better off before Jesus’ teachings of God’s love and human worth arrived through Spanish monks.

The Columbus/Indigenous People’s Day controversy helps us remember that history is filled with mistakes that flow from greed and power. The same is true for more recent protests over America’s flawed war heroes, politicians and entrepreneurs. But to judge the people of the past by today’s standards would mean ignoring complicated realities. 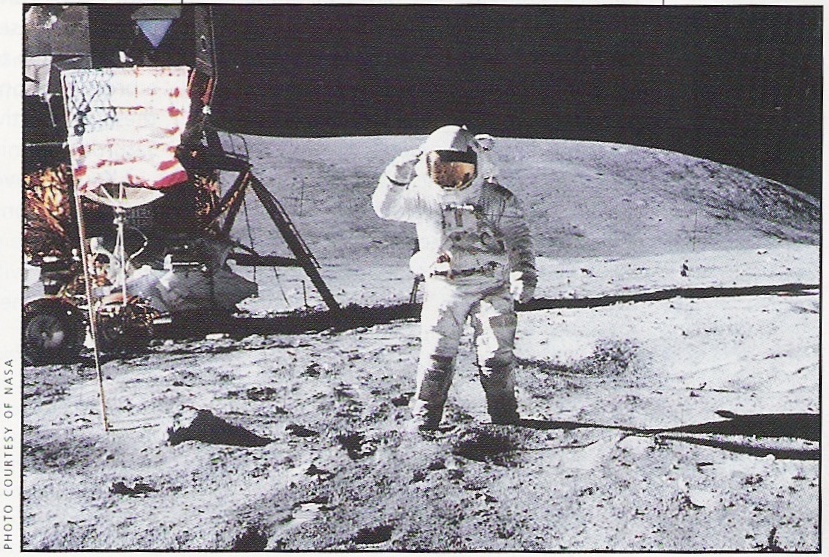 By all means, let’s celebrate Indigenous People’s Day and learn from each other’s heritage! Maybe Columbus Day should transform into “Explorers’ Day” to include captains, pilots, astronauts, scientists, and all who bravely pull the world forward. Instead of “canceling” past heroes, let us learn from those who lived before us, forgiving them as we hope to be forgiven, and inspired by them to undertake risks for a better tomorrow.

~ “I am a most noteworthy sinner, but I have cried out to the Lord for grace and mercy, and they have covered me completely.”

~ “Weep for me, whoever has charity, truth and justice! I did not come on this voyage for gain, honor or wealth, that is certain.”

~ “By prevailing over all obstacles and distractions, one may unfailingly arrive at his chosen goal or destination.”

~ “Praise be to our eternal God, our Lord, who gives to all those who walk in His ways victory over all things which seem impossible.”