Taylor Summary of the Thanksgiving holiday.

Thanksgiving in Canada (Oct) and the USA (Nov)

Thanksgiving Day is a North American holiday. It is celebrated in both Canada and the United States as a big family feast.

For many years, people in England had a harvest celebration when the grain was brought from the fields to their homes. It was called “Harvest Home.” They went to a church to thank God for the harvest. Then they had a big feast and played some sports.

Canada’s 1st Thanksgiving Day — In 1578, Sir John Frobisher and other Englishmen came by ship to northeast Canada. They wanted to start a gold mining town. Sir John wrote that they had a Thanksgiving meeting there. They gave thanks to God for their safe journey from England to this New World. This was the 1st Thanksgiving Day in North America.

About 50 years later, some other families left England by ship from the city of Plymouth on September 15, 1620. They were going to live in North America. Their small ship, the Mayflower, had 102 people on it. It was a very cold winter, and it took 65 days to cross the Atlantic Ocean. Storms blew their ship 250 km. north of where they wanted to go, but they arrived safely in North America on November 19th. For over a month they searched for a place to build a safe village.

On December 21st, 1620 (more than 3 months after leaving England) they moved from the Mayflower to an empty Native-American Indian village. They lived in some of the old Indian huts and also built some new ones. They did not have enough food on the ship for the long winter, but they did find a cornfield (maize) that the Indians had left. During that winter, 43 people died because they did not have enough food, or from the cold and diseases. 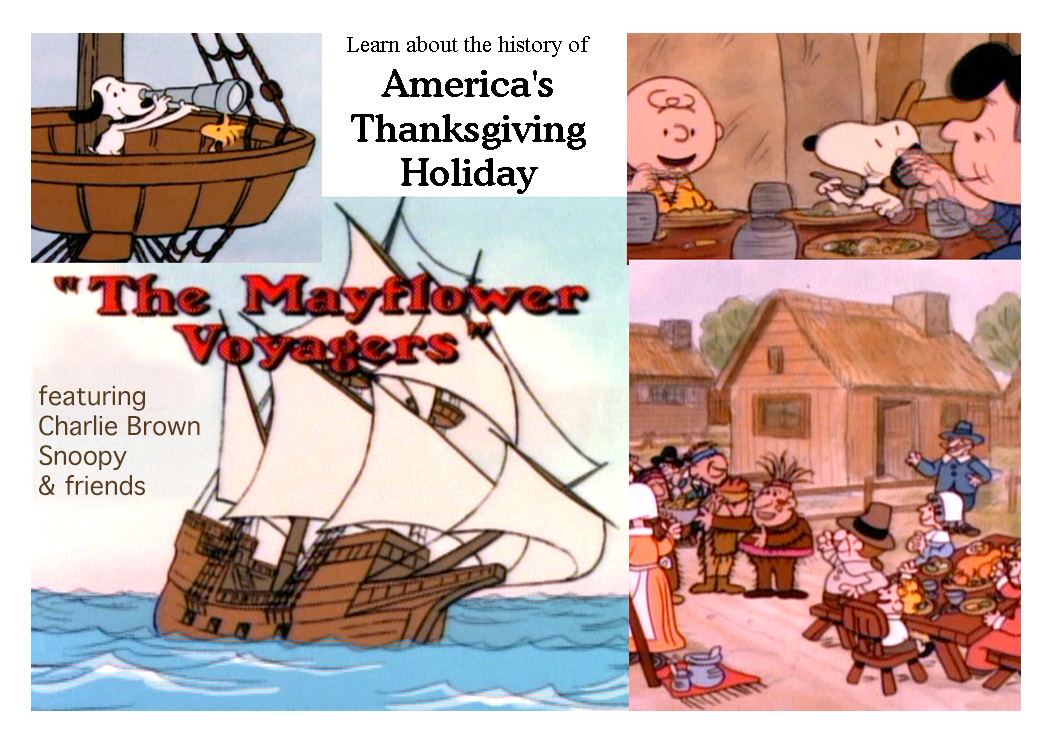 “The Mayflower Voyagers” is an entertaining way to learn about Thanksgiving history.

Then in the spring of 1621, an Indian man came to the village. His family had lived there for many years, but in 1618 most of them had died from a disease. The man’s name was Squanto. He had learned some English while working in another place.

Squanto taught the people from the Mayflower how to catch fish from the sea, how to grow some of the corn (maize) seeds, and how to find wild birds (such as turkeys) and animals for food. He also introduced them to the Indian leaders near them. Together they agreed that they would live in peace and protect each other. The Englishmen named their village the Plymouth Colony (Plymouth is the name of the town where they got on the Mayflower). These people named themselves the Pilgrims, meaning “people who go from place to place — for a religious reason — to find somewhere to live”.

During that summer of 1621, they grew good crops and killed many wild turkeys. So, in October, the Pilgrims invited the Indians to come for a feast. About 100 Indians came. The food included cooked pumpkin, wild berries called cranberries, and lots of meat from the wild turkeys and deer. Since then, these foods have been part of the traditional American Thanksgiving Dinner.

The feasting and sports lasted three days. Since these Pilgrims were sincere Christians, the main reason for their celebration was to thank God for helping them with a good harvest. Also, they thanked the Indians who had helped them so much. 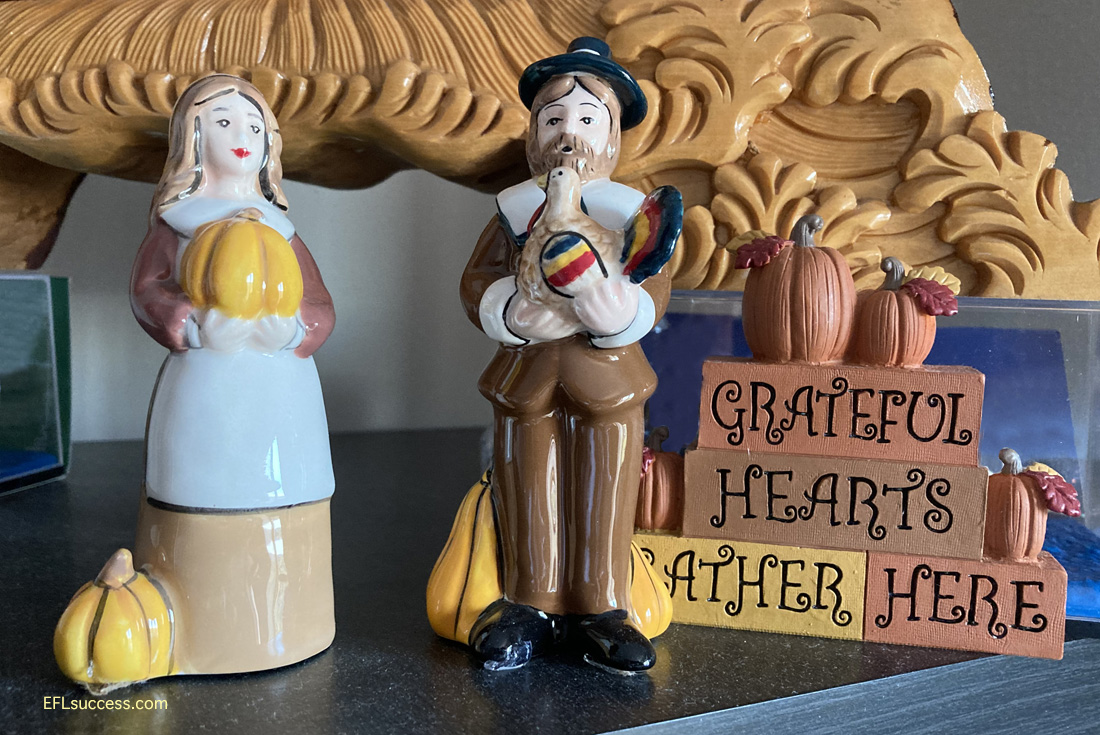 Many modern Thanksgiving decorations include symbols like turkeys, pumpkins, and people dressed in “pilgrim” clothing.

But two years later (1623), the Pilgrims had a very dry summer. Without some rain soon, the Pilgrims wouldn’t have enough corn (maize) for winter. The Pilgrims asked God to send them rain. In July the rain began again — just when it was needed. So, on July 30, 1623, the Pilgrims had another day to give thanks to God for the rain and for enough food for the coming winter. This day was not a feast day like the one in 1621, but instead, it was a day to pray to God.

Modern Thanksgiving. America’s Thanksgiving Day now comes on the 4th Thursday of November and is a non-working day. Canada has a similar Thanksgiving Day, but it is celebrated more than a month earlier — on the 2nd Monday of October. 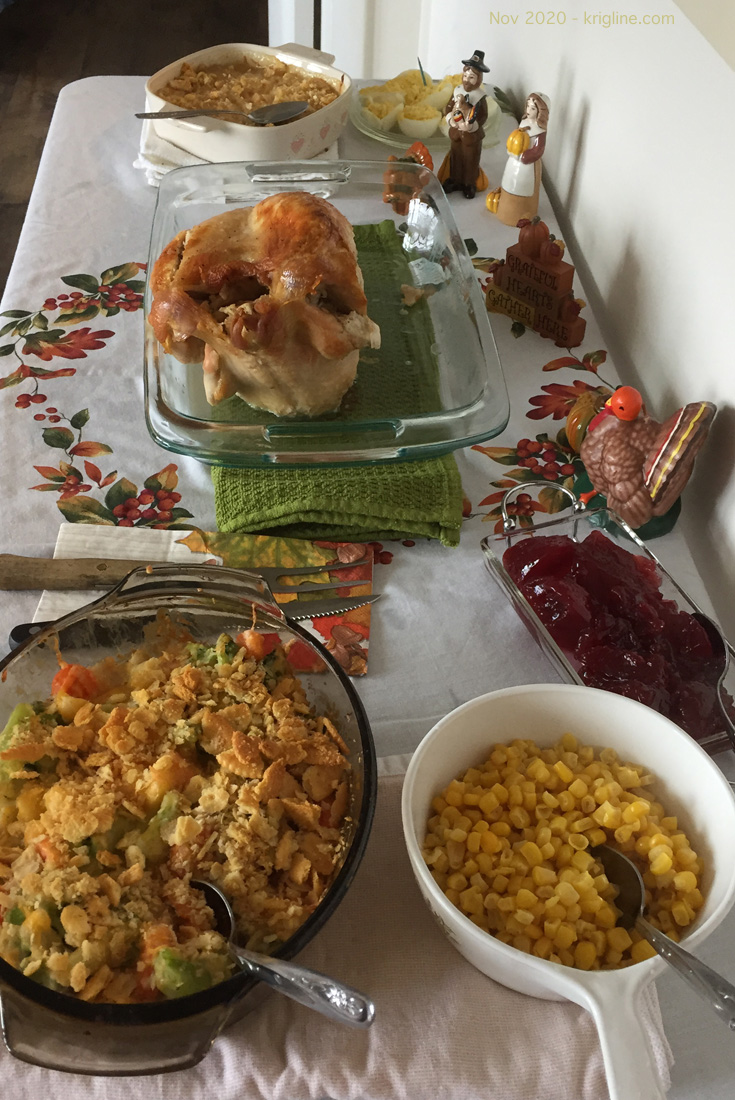 Thanksgiving is just a 1-day holiday in both countries, but many take advantage of the long weekend to enjoy a feast with relatives. Adult children want to eat the big Thanksgiving Dinner at home with their parents or grandparents. This dinner usually has what the Pilgrims ate: cranberries, sweet potatoes, turkey meat, and pie made from a pumpkin. Christian Americans also have a special time to pray — to give thanks to God for their food, family, and a place to live. During the weekend, watching sports and “Christmas shopping” are also important to many people.

Thanksgiving is a significant holiday all over North America, as families gather for good food and to wish each other (as we wish YOU!) “Happy Thanksgiving!”

Ask each other “content questions,” that have a specific answer in the text, such as…

Note to teachers: The main text of this holiday summary is © Dr. Harvey Taylor; used here with permission. Dr. Taylor is the author of “Special Days – Special Ways: Western Holidays, Customs, Culture.” This teaching resource contains two textbooks and a video tape with 20 programs, produced at the request of the China TV Teacher’s College, and designed to be the cultural component of a 3-year middle school English teachers’ video course. (Thanksgiving is Program 15, pages 467-500.) These resources are available in China. Dr. Taylor is now retired and living in the USA  (you can reach him by writing to EFLsuccess.com).