Story: George lives for others all his life. One Christmas Eve, a relative’s error threatens to put him in jail. While considering suicide, George gets an unexpected gift when an angel shows him what his town would be like if he had never been born. Many Americans watch this classic every Christmas. (1946; three Oscar nominations: Best Actor; Best Director [Frank Capra]; Best Picture; Jimmy Stewart, Donna Reed; Liberty Films/Republic Pictures; black & white drama/fantasy, with a healthy dose of romance, comedy and Christmas cheer; not rated but “G”; about two hours) 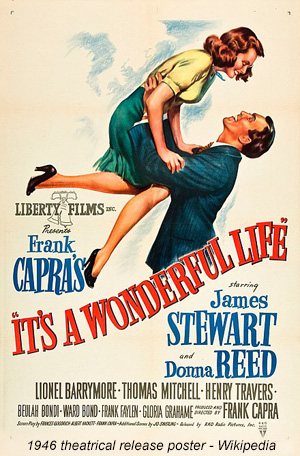 Note 1: I’ve copied the following from “The Name Above the Title”, by this film’s famous director: Frank Capra. 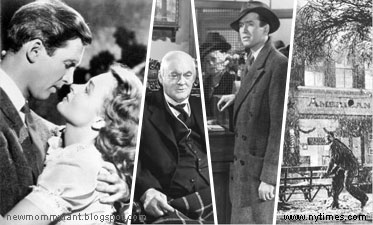 “. . .It was my film for my kind of people. A film to tell the weary, disheartened, and the disillusioned…that no man is a failure! To show [common people] that each man’s life touches so many other lives. And that if he isn’t around it would leave an awful hole. [Wonderful Life is] a film that expressed its love for the homeless and the loveless; for her whose cross is heavy and him whose touch is ashes; for the Magdalenes stoned by hypocrites and the afflicted Lazaruses with only dogs to lick their sores. I wanted it to shout to the abandoned [and abused]: “You are the salt of the earth. And It’s a Wonderful Life is my memorial to you!” (The link no longer works, but I got this quote at http://www.geocities.com/Athens/Parthenon/9502/life.html)

Note 2: This film was only marginally successful in 1946. In 1976 it was put into the “public domain,” allowing TV stations to show it without paying royalties. Thus, it was shown on TV every Christmas, and since many areas had only 3-5 TV channels, almost every American watched it at one time or another (at least, until Cable TV gave so many other choices). It’s place in American culture is evident in countless references in TV shows, cartoons, songs, etc.

(this film uses a flashback point of view; to understand the story, here is a timeline of the main character’s life)

There is a remarkably detailed synopsis of this story at http://www.filmsite.org/itsa.htm (by Tim Dirks). If you are a really diligent English-learner, I recommend that you get a cup of tea, and a dictionary, and then read it before your watch this film in English.

(For more information about Christmas, see these Christmas pages (underlined topics are on EFLsuccess.com or Krigline.com; others are on our older website): the traditional Christmas story, who is Santa (圣诞老人)?, candy canes, Christmas Perspectives (poem), and the pre-Christmas Advent season. Also look for Christmas wallpaper on our old website. You’ll also find movie study guides on this website (or our old site) for some great holiday films: A Snoopy/Charlie Brown Christmas, Last Holiday, White Christmas, The Grinch, Christmas Carol, It’s a Wonderful Life)