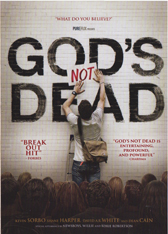 Story: Josh is a pre-law student at an American university. His philosophy professor asks all students to sign a paper saying “God is dead,” but Josh refuses to violate his conscience and submit, even though his stubborn decision is not supported by his girlfriend or parents. The story shows the result, as well as the lives of various people connected to Josh, including his pastor, a Chinese classmate, and a middle-eastern student who works in the cafeteria. [2014; starring Kevin Sorbo (Prof), Shane Harper (Josh), David AR White (Rev Dave), The Newsboys, Willie and Korie Robertson; PureFlix Entertainment; drama, inspirational; PG)

Note 1: At the end of the film, the credits list dozens of US court cases defending the rights of Americans to freedom of speech, religious liberty, etc., saying that these cases inspired the film.

Note 2: According to www.imdb.com, this film had a 2 million dollar budget (very small for a motion picture). It earned almost five times that much on it’s opening weekend in theaters. 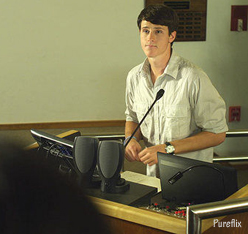 Student Josh defends what he believes in “God’s Not Dead”

Synopsis: Freshman university student Josh Wheaton attends an “Introduction to Philosophy” class, where the uncompromising Professor Radisson asks all students to submit a signed statement that “God is dead” so that he can skip a discussion about God’s existence and teach only the work of atheist philosophers. When Josh refuses due to his own Christian beliefs, the Professor challenges him to defend his position that his God is real–which leads to a series of confrontational presentations between himself and the professor. The class is “the jury” which will decide if Josh’s presentations deserve a passing grade. The stakes are high for Josh, for he risks his relationship with his girlfriend and parents, as well as scorn from classmates who are assigned extra readings because Josh refuses to go along with the majority. The professor is also a brilliant man, intent to make this young student look bad in his class, and he even promises to destroy Josh’s academic plans (to attend law school). Josh’s fellow Christian girlfriend (among others) urges him not to throw away his future with this meaningless action of defiance. But Josh feels deeply that this is something that God wants him to do.

One of the main ideas in Josh’s presentation is that God gives us all free will. Therefore, Josh’s goal is not to convince everyone to believe what he believes, but to empower people to make an intelligent, free choice. The professor, and people who belong to a “religion” (including some parts of Christianity), want to pressure or demean people into believing what they believe. Josh wants people to hear the truth and make up their own minds.

Several sub-plots keep the viewer interested (or perhaps confused, though they all present interesting points to talk about!). One sub-plot involves the endless delays and curious incidents that hinder Josh’s pastor (Dave) and his African missionary friend (Jude) from driving to Disneyworld. Another sub-plot involves foreign-student Ayisha, who is at odds with her father’s conservative Muslim religious principles. We also follow the professor’s girlfriend (Mina) and her hotshot businessman brother (Mark), their mentally ill mother, and Mark’s busy-blogger girlfriend (who receives bad news from a doctor). –adapted from a synopsis written by ChazzMatt and posted at http://www.imdb.com/title/tt2528814/plotsummary?ref_=tt_ql_6

(A) If you were Josh, and you heard a lecture like this on the first day of class, what would you have done, and why?

(B) Let’s say you are studying abroad. Can you think of anything you believe or anything about your home country/culture that you think you would “risk so much” to defend? If so, explain. If not, why not? (Do you think that people should have deeply-held convictions?)

(C) What do you think of what Ayisha’s father said to her? (See dialog 5)  Later, he beat her and kicked her out of his house. Do you understand why he did this? [Accurately, I think, the film showed that this latter decision was very hard for both of them.]

(D) Also talk about the interaction between Martin and his father.

(E) I think that Ayisha, Martin and Josh all had fathers who refused to let their son/daughter think and decide for themselves. They wanted to force their own worldview or choices on their children. What other similarities and differences did you see in the relationships between parents and their adult children? [At the very least, I think they showed that what we believe—right or wrong—should have a big effect on what we do. Comment on or illustrate this, if you wish.]

(F) Talk about the relationship between Josh and his girlfriend (of six years). If you had been one of them, what might you have done differently?

(G) What is the point of all the delays that Pastor Dave and his friend experience? (the car won’t start, the rental car is broken, the crowd blocks the way…)