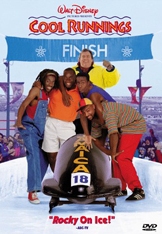 Story: Celebrate the Olympic spirit with this Disney classic, based on the true story of the first bobsled team from the Caribbean (1988 winter Olympics in Calgary, Canada). Everyone laughs when a disgraced coach takes on the challenge of bringing a winter sport to sunny Jamaica. But see who gets the last laugh when team spirit and a healthy self-confidence turn disaster and disagreement into Olympic pride. “Cool runnings” is a Jamaican phrase which, according to the movie, means “Peace be the journey.”  (1993; Disney; sports/comedy/history; 1:38)

Note 1: This will help you understand the tension: Blitzer, who becomes the Jamaicans’ coach, cheated to win the Olympics when he was an athlete 20 years earlier (1972 Olympics). He had added weights to the sled, and when discovered (“busted”) the team had gold medals taken away. He was so ashamed that he left his country—the US—and moved to Jamaica (to be near a friend), to get as far away as possible from winter sports. Now, Blitzer’s old teammates are US coaches, and his former coach is now a judge in the Calgary Olympics.

Note 2: Now, the winter and summer Olympics are two years apart. Back when this story happened, the winter Olympics were a few months after the summer games.

Sentences & expressions from the movie:

Building strength by pushing a car.

Many problems to overcome.

They arrive to experience a temperature of 25 below zero!

First run is faster than expected.

Dialogs & expressions from the movie (part 1):

Moving into the Olympic athlete housing.

Making friends (and enemies) in a bar.

Friends and family back home cheer them on.

Arriving at the race in Jamaican style.

The Olympics turns strangers into teammates.

The key to bobsledding is a fast push-start.

A new photo is posted at the Jamaica Olympic Committee office.

PS: A 2022 ESPN article said that the Jamaican bobsled team achieved some success in the first few Olympics after the one shown in the film (1988), including “a surprise 14th-place finish” in 1994. But then they couldn’t race fast enough to “qualify” from 1998 to 2022. In 2022, Jamaica qualified with a 4-man bobsled, a 2-man bobsled, and a 1-woman monobob. The men came in last place; the woman next-to-last. Chris Stokes was a member of the 1988 team, and in 2022 was president of Jamaica’s bobsled federation; in 2022, he said the team will keep pushing hard, in hope of being on the medals stage by 2030. You can read the article here: