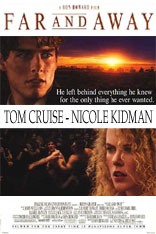 Story: This is the story of Irish immigrants to America in the late 1800s, who struggle with hunger, hatred, prejudice and “just plain hard work” to start a new life. How do you define success? In this movie, the daughter of a wealthy landlord left a big house and privileged life to become an immigrant; the son of a poor tenant farmer found success as a boxer—for a while! Like the people in this film, we often discover that true success turns out to be something quite different than what we originally thought. (1992; Tom Cruise, Nicole Kidman, Dir Ron Howard; Imagine Films; Boxing, Romance, Drama, US History; PG-13; 130 min)

In the late 1800’s, landlords own most of the land in Ireland. Tenant farmers are allowed to live and work the land, but must pay rent to the landlord. Because the land has been overworked, and because of poor weather, crops (i.e., food) are hard to grow. Greedy (or ignorant?) landlords are evicting farmers because they can not pay the rent.

Since the 1830’s, many Irish people have been moving to America in hopes of finding a better life. They speak English (with an accent), but prejudice makes it hard to find decent work and living conditions. The discrimination comes because there are so many of them, and because of cultural prejudice (the British and the Irish had been fighting for generations).

After an accident (caused by a landlord) kills Joseph’s father, and then Mr. Chase burns down their home, Joseph Donelly seeks to avenge his father’s death by killing his landlord. He fails to kill the landlord, and instead ends up in a dual (gun battle) with Mr. Chase.

Mr. Christie’s daughter, Shannon, is unhappy with her “high society” life in Ireland. She wants to go to America to find “freedom” away from her parents and Mr. Chase. However, she needs a “body guard” during the ocean crossing. At the last minute, she rescues Joseph from his dual and they go to America together. When they arrive in Boston, Shannon’s money is stolen, so she is left in a new country without any way to live. To keep Boston’s “Irish Catholics” from killing Shannon (an “Irish Protestant” and “enemy” because her father was a hated landlord), Joseph says she is his sister. Next, they share a rented room for several months, trying to save enough money to move west.

Life was hard for new immigrants. Immigrants who had been in the US longer (e.g., “Mike” the ward boss) took advantage of this, helping to give new people jobs and a place to live, often in exchange for votes (political power) or money from those who profited from cheap immigrant labor. (You will also hear/see Mike asking for votes while complaining about “the Italians who are taking Irish jobs” in America.) Conditions were poor, but many immigrants had no other choice. Joseph and Shannon get a job “plucking chickens” for less than $4 per month.

Mike’s “social club” (bar) offers entertainment in the form of alcohol, women and boxing (fighting). When Joseph decides to box, he earns $4 his first night. He then becomes relatively rich as a fighter, until he loses an important fight (in part, trying to protect Shannon). Mike and an important politician bet on Joseph to win, so they lose a lot of money when Joseph loses the fight, and then they evict Joseph and Shannon. After wandering without food for several days, Shannon is shot while they run away from a house they had broken into.

Meanwhile in Ireland, the Christie’s home had been burned by unhappy tenant farmers, so they move to America to find Shannon. Stephen Chase is with them. When Shannon gets shot, Joseph takes Shannon to the American house her parents were staying in.

Like many Irishmen (and Chinese people—who were also discriminated against), Joseph then finds a job working for the railroad. He tries to forget about Shannon and his dream of getting some of Oklahoma’s “free land.” However, one night he dreams about his father and decides to continue the journey to Oklahoma. Shannon, her parents, and Stephen Chase also go to Oklahoma to run in the land race (see below). 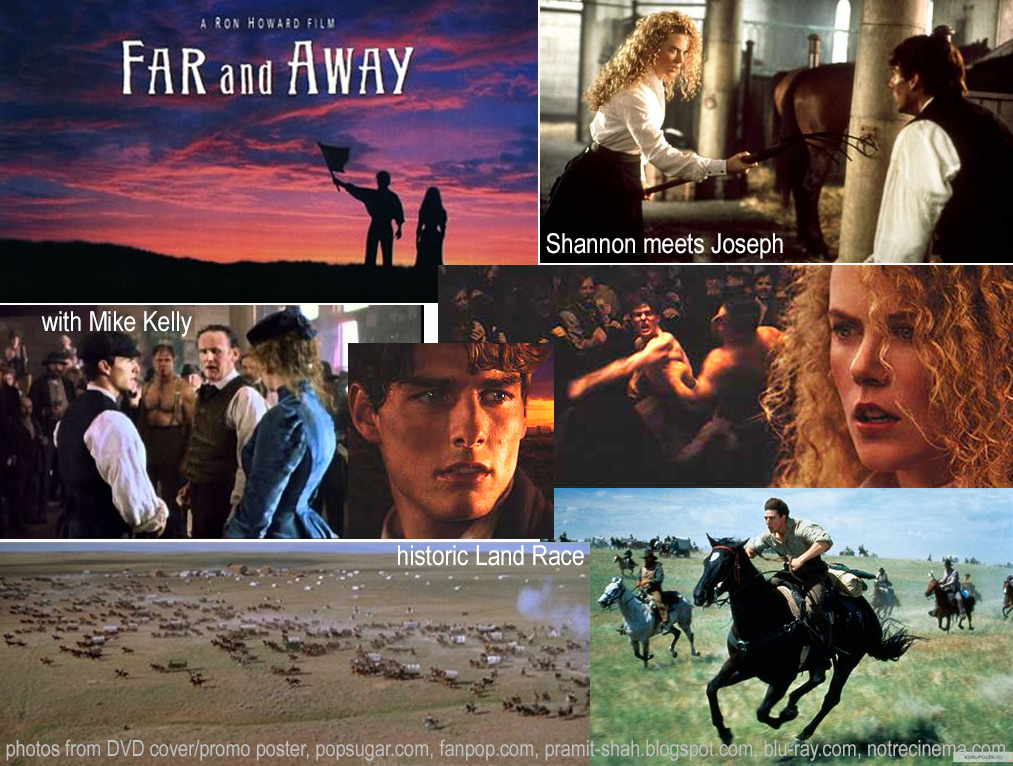 At the end of this film you see one of the Oklahoma land rushes (there were five, I believe). This really did happen. In each “land rush” (or race), part of the Oklahoma Territory was opened to new settlements (primarily for white people; the US Government had purchased it, more or less, from American Indians). Whoever replaced the government’s flag with their own stake got the land—totally free. But this type of “free land race” was not (to my knowledge) repeated elsewhere. Most of “the west” was sold, piece by piece to settlers, by the US government (who bought it or won it in wars with Indians, the French, Spain, or whoever claimed to own it).

Far and Away shows the race that took place on September 16, 1893. Net sources/statistics are inconsistent, but this was apparently the biggest land rush, in which more than 100,000 settlers “raced” to claim part of the 6.5 million available acres (cut into 42,000 parcels of 160 acres each—see below). Once the 42,000 parcels were claimed, tens of thousands of other participants were disappointed. Some bought land from the winners, while others simply left empty-handed.

The first race started at noon on April 22, 1889 (the day after Easter). A seemingly reliable website (from Homestead Congress) says that only 11,000 parcels of land were available that day. Other sites say that 50,000 to 100,000 settlers were competing for those parcels, and that the majority of claims went to “sooners” (like the Christies in this film) who violated the law, entering “sooner” than allowed.

Interesting link: Someone who found my webpage about Far and Away sent this link to interesting information about immigration to the US, past and present (with links to lots more information). Check it out! www.uscitizenship.info

(some are from http://www.imdb.com/title/tt0104231/quotes) blue indicates a key dialog or sentence)    (underlined words are vocabulary terms)

Sentences/dialogs from the movie: (Part 2)

Sentences/dialogs from the movie: (Part 3)

You are here: Far and Away > §-EFL Movie Study Guides > 页-The Latest > EFLsuccess.com