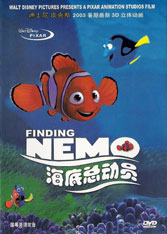 Story: A “down under” undersea cartoon adventure. After tragedy makes Marlin (a clownfish) an overprotective father, his only surviving son (Nemo) rebels, and is captured off Australia’s Barrier Reef by a Sydney dentist. While Nemo and new fish-friends in the dentist’s aquarium plan Nemo’s escape, Marlin and his unlikely helper, Dori (a bluegill), face sharks, jellyfish, currents, seagulls and more in Marlin’s incredible journey to find his son. You’ll be moved by this parent’s love and the lessons both father and child learn along the way. (2003, Oscar for Best Cartoon; Family comedy, Adventure; 100 min) 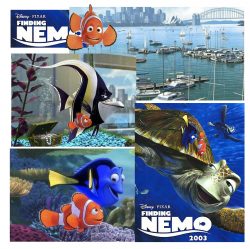 Note 1: You will hear Australian accents and a few Australian phrases that people in other parts of the English-speaking world don’t use. I don’t know if the American film-makers got such things right, but it is a good reminder that there is no ONE way to speak English!

Note 2: As of January 2005 (about a year and a half after release), IMDB.com said this film was the bestselling DVD of all time in the world with 22 million copies sold. If you are with a group, talk about why it was so popular.

Note 3: A film’s subtitles sometimes show “oral English” terms that are not really words (so English-learners should not write things like this): wanna = want to; gotta = have got to; gonna = is going to. Likewise, an apostrophe is sometimes used to replace a “g” when reporting oral English: for example: ridin’ = riding, takin’ on = taking on

Say these dialogs out loud with your friends; it will help you prepare to watch the movie. The underlined words are defined in the vocabulary section above. You could assign a “narrator” to read everything in [brackets] or (parentheses).

Note: some of these have been shortened or simplified a little for my students; others stick to the subtitles even if they aren’t exactly like the dialog.