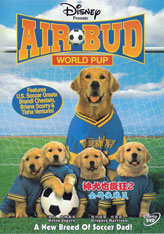 Story:  Josh is a teenage basketball star, until he joins his high school soccer team to get closer to a beautiful “football” player from England. As you watch this cute film, you will learn from his mistakes as he falls in love, but you will also be amazed at his dog (Buddy, also called Air-Bud), who is a great soccer player too! Of course there are bad guys (a pair try to steal Air-Bud’s puppies, and a rival coach won’t let Air-Bud play on the team), and you also see some soccer action. There are some silly moments, including an absurd ending, but it is a fun film for dog lovers and soccer fans. (2001; Keystone Family Pictures; family comedy, sports, teen romance; 83 min)

Setting: a “typical” small town in the USA (although most of this film was shot in Canada!)

Note 1: This is Air-Bud 3 (the dog’s third movie). In the first film, we learn that Josh’s father died as a test-pilot, and we also see that the community of Fernfield thinks of the dog as “everyone’s dog.” So don’t be surprised when just about everyone in the street greets “Buddy,” gives him food, and cheers for him at the ball game.

Note 2: A lot of the humor in this film is related to exaggeration. For example, when Josh blows a dog whistle, it does not simply call his dog, dozens of dogs come running. When people try to “look British,” they end up with a kilt (formal Scottish dress) or a huge moustache. The “bad guys” don’t just have an old truck, it literally falls apart as they drive. All of this is supposed to look “extreme,” and therefore funny.

Note 3: One reason I like this movie is because some of the humor comes from differences between British and American English. (see “football” below)

Note 4: The subtitles contain many words that represent dog sounds, including yapping, growling, whining, wimpering, howling, yelping, barking. To figure out what these words mean, watch for these words, and listen to the sounds the dog is making.