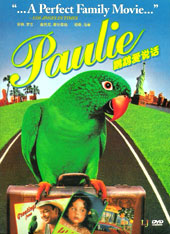 Story: Paulie is a parrot (鹦鹉) whose mouth keeps getting him in (and out) of trouble. Separated from the little girl he loves, Paulie flies across the USA, and (along with lots of laughs) lets us experience several aspects of American culture, including a look at life for immigrants, Hispanic people, senior citizens, the handicapped, a small-time thief, and a greedy scientist. (1998; Cheech Marin, Buddy Hacket; DreamWorks Pictures; comedy, drama; PG; 91 minutes)

Notes: Misha is a recent immigrant, so his English is not standard; in fact, the writers have given Artie and Ignacio poor English too, to show a lack of education. (I haven’t fixed their speech in the following dialogs, so I hope English-learners can figure out what people are trying to say!). This movie uses the “flashback” technique to tell a story, so it starts near the end, and then goes back to tell us Paulie’s story.

Interesting fact: According to ehow.com, this type of parrot has “a life expectancy of 15 to 25 years” http://www.ehow.com/how_2046279_care-conure-parrott.html

Paulie starts as a gift to a little girl (Marie), who stutters; Grandpa thinks that she needs “someone to talk to.” But Marie’s parents couldn’t deal with Marie’s stuttering problem, and they sell the bird, who has his heart set on getting back to Marie someday, if possible. Paulie has several owners, including a Pawn Shop owner, who sells him to an elderly lady (Ivy). Paulie helps Ivy after she goes blind, but eventually flies across the USA to Los Angeles. There, he falls in love, works at a “Taco stand” and then later (unknowingly) for a thief. When caught, Paulie ends up at an Animal Research Institute. But the top scientist breaks a promise to set Paulie free, and then locks the bird in the basement. A new janitor finds Paulie, hears about his adventures, and sets out to reunite Paulie and Marie.

(in part from http://www.imdb.com/title/tt0125454/quotes; imdb’s website is a great place to find movie facts and more)

Say these dialogs out loud with your friends; it will help you prepare to watch the movie. Blue parts below are particularly important. The underlined words are defined in the vocabulary section.