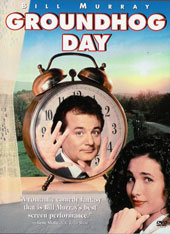 Story: What would you do if you could live the same day over and over? A selfish TV weatherman is trapped, reliving a cold February day—will he use this “extra time” to achieve personal goals, to improve himself, or to help others? Once he takes the focus off himself, his eyes become open to the richness of life and love. This humorous, romantic film challenges us to think about what is really important, and shows that the road to fulfilling our dreams can be full of surprises. (1993; Bill Murray; Columbia Pictures; comedy, romance, drama; PG; 101 minutes) Setting: mostly in a small town in the eastern USA, famous for its festival every February 2; 1990s Note: This film has a lot of unfamiliar terms and important dialogs, so I HIGHLY encourage you to carefully study this guide before you watch the film.

Plot summary: Phil Connors is a self-centered TV weatherman, who is sent to cover the annual Groundhog Day (February 2) celebration in Punxsutawney, Pennsylvania. He feels superior to the co-workers who come along: Rita (a news producer) and Larry (cameraman/driver)—and they are unhappy about his Prima Donna attitude. After Phil gives his on-camera coverage of the celebration, heavy snowfall traps them in this “boring” little town. Worse yet, the next morning Phil awakes to find that he has to live this “terrible day” over and over again. At first, he uses this situation in a typically selfish way (deceiving a woman so she will sleep with him, stealing money from distracted guards, doing crazy things, etc.); later he tries to “improve himself” to impress Rita (learning to speak French and to play the piano, etc.); but all of this seems empty and useless to him. Then he discovers the key to happiness in an unexpected place. Maybe Phil’s mistakes and discoveries can help you reach your goals too!

A little history: In case you are wondering where the celebration of “Groundhog Day” came from, it dates back to before the 1800s. According to Newsy (Feb 2022), this tradition started with a Christian celebration known as Candlemas, in which the faithful would take candles to church to have them “blessed”; that morphed into a tradition that if the candle cast a shadow, there were would a longer winter. Then in the early 1800s, German Christians added a hedgehog, saying that if he saw his shadow, there would be more winter. When Germans immigrated to Pennsylvania, they brought the tradition with them but couldn’t find a hedgehog and substituted a groundhog. The first news report of the PA ceremony was in 1886. https://www.newsy.com/stories/groundhog-day-punxsutawney-phil-predicts-more-winter/ (2022 Feb 2)

(see “Some Answers” below)

(This movie guide has extra features like a vocabulary quiz and a section called: “There’s nothing new” isn’t a new idea. Scroll down past the dialogs to find these features.)

(*these conversations are particularly abbreviated; dialogs in part from http://www.imdb.com/title/tt0107048/quotes; blue indicates a key dialog or sentence; imdb’s website is a great place to find movie facts and more)

Thanks goes to Robin, Peter, Paul and other teachers/colleagues whose files helped me create this resource.

(match each number with a letter) (see “Some Answers” below)

When I was in college, a teacher had us read a 3000-year old text that presented many of these same ideas. (I think of this “ancient wisdom” whenever I see this film.) It was written by Israel’s King Solomon, known as “the wisest man who ever lived.” (You’ll find it in the Bible, called “Ecclesiastes” or “传道书”—you can find it on line in many languages at http://www.biblegateway.com/. I’ll include the “little numbers” in case you want to find a particular section in the Bible.) Like Phil in this movie, Solomon looked for satisfaction in sex, money, control, learning, and observing humanity. I think they might even arrive at similar conclusions. Here are a few passages from Solomon’s essay, including one of the most famous poems in the Bible. Like this movie, the beginning is rather depressing, but it is worth reading to the end!