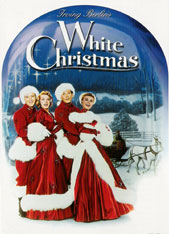 Story: The song “White Christmas” is one of the most popular modern holiday songs ever recorded. It is also the center of this classic film! In the movie, two top NY entertainers fall in and out of love with a pair of cute, singing sisters. They end up working on their next show in a Vermont snow lodge, but there’s no snow in Vermont, and the owner (a retired general and old friend) is in financial trouble. Can these entertainers save the Inn? Who is in love with whom at the end of the story? There is also a surprise ending that involves lots of cold white stuff! (1954; Paramount Pictures; romance, comedy, musical; 120 min with lots of beautiful singing and dancing)

Setting: The movie begins in 1944, near the front lines of a World War II battlefield, probably in Germany. It then moves quickly to 10 years later for the rest of the story.

Note 1: “White Christmas,” a song written by Irving Berlin, was recorded by the actor in this film (Bing Crosby) during World War 2. The song won an Oscar for “best song” in 1942 (in the movie Holiday Inn), and sold more than 30 million copies when it topped the “pop charts” in 1942, ’45 and ’47. This song has joined centuries-old classics that are sung every Christmas; new Christmas songs are written every year, but few enjoy the success of “White Christmas.”

Note 2: this movie contains several slang expressions from 50 years ago that are not used any more!

(For more information about Christmas, see the links to Christmas pages on the bottom of the “candy canes” page on our antique website. You’ll also find movie study guides on our websites for some great holiday films: A Snoopy/Charlie Brown Christmas, White Christmas, The Grinch, Christmas Carol, It’s a Wonderful Life)