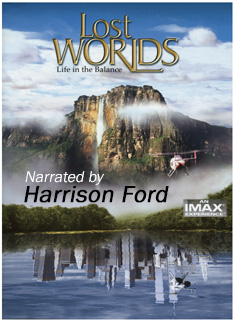 Story: Will wild animals someday freely roam through today’s great cities, as they do through the deserted ruins of ancient Tikal? What can we learn from the mistakes of these once-great civilizations? This documentary takes you to places that will surprise you with their beauty and complexity, from the mysterious mountains of Venezuela to the water system under your feet. Because of earth’s biological diversity, when we protect nature, we protect ourselves. (Documentary, narrated by Harrison Ford; 40 minutes; Imax; 2006)

Warning: some students are squeamish about the bugs, but it has lots of beautiful scenery

This film takes us to some great locations, such as this Mayan village.

There’s lots of beauty to see in this documentary (as well as some bugs, reptiles…).

This cute sea otter helps us see how fragile our world is.

Scientist Fabian Michealangali, American Museum of Natural History, is one of our guides.

We also visit big, modern cities, where you may be surprised too!

Sentences/dialogs from the movie: (part 1)

Blue parts indicate that they are especially important. (imdb’s website is a great place to find movie facts and more). All of these are from the Narrator, unless otherwise indicated.

The road to the Table Mountains is long and difficult.

The coatimundi are mid-size mammals, which are an important part of the Amazon ecosystem.

This helicopter takes the scientists to the top of Roraima.

Soil collects into “islands” on the barren rock.

Why should we be concerned with unusual small frogs like this one?

Artists and historians speculate about what Tikal once looked like, and why it suddenly was abandoned.

(These students try to find things within a one-meter square.) This film also challenges us to look carefully at the world right around us.

Sentences/dialogs from the movie: (part 2)