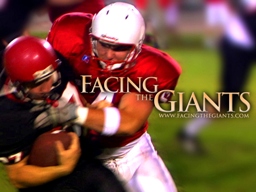 Story：What are you living for? Americans love babies, and they love winning football teams. But Coach Taylor’s Eagles have lost for six straight years, and off the field, he can’t get his wife pregnant. With the “giants” of fear and failure defeating him in football and life, he finds inspiration in his Bible to live for something more important than a football win-loss record. This film is about the power of faith, hope and love, and it can show you how to face and overcome your own “giants.” (2006; Sherwood Pictures; sports, drama; PG; 111 minutes)

Note 1: Religion is a very important part of America’s culture, esp in the South. Sometimes, the “belt” of major cities in the South (including Atlanta, and all the way to Texas), is called America’s “Bible belt” because so many people there consider the Bible to be very important.[*1]

Note 2: My students in China would be interested to learn that Coach Taylor, as a high school football coach with a “losing record,” makes 24 thousand dollars a year, while his wife earns $6000 working part time in a flower shop (2006 figures). This is not a high salary in America, which helps explain why they cannot afford to pay for home or car repairs, much less to buy a new car.

Note 1: During the games, you probably won’t be able to understand the announcer’s words. Many words are used in non-standard ways to “report” sports action. So, just try to watch the action. Here are the basics of American football: one team has the ball (they are called “offense”), and they want to get to the goal (also called the “end zone”), while the other team (the “defense”) wants to stop whoever has the ball. If the offense can’t keep moving forward, then the other team gets to try. (From the time the ball is touched to the time it stops is called a “play” or “down,” and the offense has four downs to move at least 10 yards/meters.) If they make it to the “end zone” then it is called a “touchdown;” when this happens, the referee (and many fans) hold both arms straight up.

Note 2: Football “scoreboards” are used in the movie to show you which team is winning. High school scoreboards usually refer to the teams as “guest/visitors” and “home.” In one game, for example, it’s guest 23, home 0 (so the Eagles—playing on their “home” football field—were beaten badly). Normally, a team wears white when they are the visitor, and their own color when they are at home.

Say these dialogs out loud with your friends; it will help you prepare to watch the movie. Blue parts below are particularly important. The underlined words are defined in the vocabulary section. (These photos were copied from http://www.kendrickbrotherscatalogue.com/facingthegiants/) 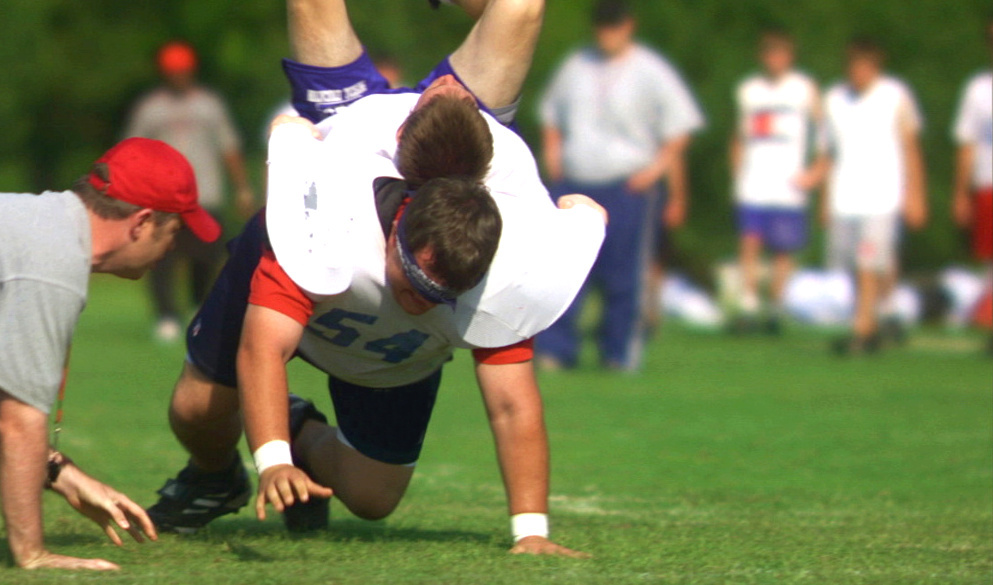 Final thought: The Bible does not promise that God will make you win all of your football games, but many people find that if they put God first, show respect to each other and to their leaders, and stay humble, then God will give them extra strength to work hard. That leads to an inner feeling of satisfaction, which often leads to results that others will call “success.” This is partially what Christians mean when they say that prayer doesn’t change God, prayer changes us. Mr. Bridges would probably say that prayer, and studying the Bible, “prepares us for rain” (see quote 11)

[*1] “Many basic concepts and principles of Western culture have come down from the Bible. Many common English phrases and expressions have their origin in the Bible as well. So whether you are reading this book [the Bible] for cultural and historical knowledge or for improving your English, the Bible is still a book for all people at all times.” book introduction, Chinese-English “Crazy English” Bible, inside cover

[*2] This may sound impossible to foreign students, but it isn’t uncommon for Christians to generously help each other in times of need, or simply to give a gift as a way of saying “we know you sacrifice a lot to do such-and-such, and we just want to help you.”