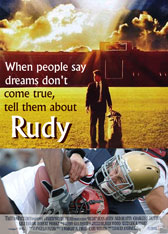 Story: Rudy presents the story of the only football player at prestigious Notre Dame University ever carried off the field in celebration by his teammates. Rudy is small and lacks talent. Everyone laughs at his dream—except himself. Rudy makes up for his weaknesses with a determination to help every teammate perform at his best. What is keeping you from your dreams? Maybe this film will help you overcome it! Based on a true story. (1993; Tristar Pictures; starring Sean Aston; drama, college sports/life)

Setting: Mid 1970s, in the Midwest US. First we see Rudy’s childhood in an urban community (near Chicago, Illinois), then at high school, then a junior college, and finally at Notre Dame University (Indiana).

Note 1: You will hear two “college” songs during the movie. The first is the football “fight song” and the second is the “college theme song” or “alma mater.”

Note 2: Athletes and steel workers have a reputation for foul language, so you will hear it in this film (like most American films).

You were meant to wear that jacket!

(to help you understand what you will see)
Rudy was one of many children in a large Catholic family. His father worked in a steel mill, and loved to watch Notre Dame University football games on TV.

Rudy attended a Catholic high school, so you will see that his teachers were all priests (牧师). Rudy liked to daydream, especially about becoming a Notre Dame football player, but he did poorly in school. (Rudy had a learning disability called Dyslexia, but no one knew this until later.) His grades were not good enough to go to college, so after high school he worked in a steel mill with his father and brothers.

When an accident killed his best friend, Rudy decided to follow his dream of becoming a football player at Notre Dame. The university’s retired president (Father Cavanaugh) befriended Rudy, and helped him enroll in a junior college. At the junior college, a Teaching Assistant (named D-Bob) became Rudy’s friend, helped him to overcome his Dyslexia and taught him how to study (in exchange for Rudy helping D-Bob overcome shyness around women!).

After trying (and failing) for a few semesters to transfer to Notre Dame, he finally gets to enroll. Everyone on the football team has a full scholarship, but the coach sees extraordinary “heart” in Rudy, in spite of his size and talent shortcomings. Now, practice after practice, Rudy gets trampled by some of the best players in college football.

Does Rudy’s dream of playing football for Notre Dame come true? You will have to watch the movie to find out!

Mary and the Boosters

Each game has two sides competing (in this case, from two universities). Each side has two teams (the “offense team” tries to score; the “defense team” tries to keep the other team from scoring). A team has 11 men, so each side needs 22 players. However, because the game is very demanding, a good coach rotates players on and off the field throughout the game. There are also special players needed at certain times (like those who can kick well). According to this movie, college rules say that a side can have only 60 players “dressed out” for each game, but good teams have more players than this at practice, particularly on the scout team. Since there are 60 “dressed” players and only 11 are on the field, 49 men “ride the bench” at any one time, and many almost never get to play at all (in a real game).

College football is a major source of pride and money for American universities. If your college team wins a lot, you are more likely to donate money to the university after you graduate. Notre Dame wins a lot, so every Saturday (for 10 weeks in the autumn), 60,000 people buy tickets to see the games in person (a ticket can cost from $10 to $400, or more). In addition, TV stations and advertisers pay a lot of money to the university when a game is broadcast on TV, but they only want to broadcast popular teams who usually win. All of this generates millions of dollars every year for universities. Therefore, there is great competition among universities to get the best high school football players to enroll at their school. To entice these great high school athletes, universities offer football scholarships. According to the film, ninety-five Notre Dame football players have “full scholarships,” even though college athletic rules allow only 60 men to “dress out” for each game—which means that in each game 35 football players sit in the crowd, having had ALL of their college expenses paid but not being allowed to compete! (There are also 10-15 scout team members—like Rudy—in the crowd every week.)

(mostly from www.imdb.com/title/tt0108002/quotes; blue indicates a key dialog or sentence)

If showing this in three parts, part 1 ends at 38:50; “minimum wage.” If showing in two parts, stop after Rudy meets Mary (about 45 minutes).

A word with the coach

D-Bob heads off to law school

You’re five foot nothin’ but you hung in there.

Finishing what he started

(You can talk to friends about these after the movie)

1. Which statement best describes Rudy at the beginning of the film:
A. Rudy lives in a wealthy family near South Bend, Indiana.
B. Rudy is one of many children in a large Catholic family.
C. Rudy’s father is a priest, so the whole family loves Notre Dame.

2. While he was growing up, Rudy’s teachers thought he
A. daydreamed about playing football too much.
B. would someday be a great scholar.
C. should find help to overcome a learning disability called Dyslexia.

3. Rudy wanted to attend Notre Dame University because:
A. all Catholic children want to attend this Catholic university.
B. it had one of the best college football teams in the USA.
C. he wanted to be a priest someday.

4. What event (four years after finishing high school) finally got Rudy to go to college?
A. Notre Dame University offered Rudy a full scholarship to play football there.
B. A teacher named D-Bob taught Rudy how to overcome his Dyslexia (reading problem).
C. An accident killed his best friend, and Rudy decided to follow his dream.

5. When he arrived in South Bend (early in the morning), he met
A. an angry guard who told him to go back home.
B. a kind priest who helped him enroll in a Junior College.
C. his brother, who was already a football star in South Bend.

6. D-Bob helped Rudy learn how to study and overcome his Dyslexia, and in exchange Rudy:
A. paid D-Bob a fee of $5 per hour, since this was the normal fee for a tutor.
B. gave D-Bob free tickets to see Notre Dame football games every month.
C. helped D-Bob to find dates and to overcome shyness around women.

7. Like Harvard, Yale, Oxford, Cambridge and most other legendary universities, Notre Dame University:
A. started as a college to train Christian leaders.
B. offers many scholarships to play football.
C. is famous as a great place to study law.

9. Fortune, the black man who was in charge of maintenance at the university football stadium:
A. had never seen a football game, even though he worked in a football stadium.
B. gave Rudy a place to live in exchange for Rudy’s help at the stadium.
C. helped Rudy understand the things that are really important in life, like getting an education and not quitting.

10. One of the DVD extras is an interview with the real Rudy. Which of the following statements do you think he made:
A. “Chasing a stupid dream causes nothing but heartache.”
B. “The most powerful thing you can give somebody is hope.”
C. “I wish I could have played a Hobbit in the movie Lord of the Rings.”

(The answers are at the bottom of the Narnia: Lion, Witch & Wardrobe web page.)

Some answers to questions #4 & 5 at the bottom of “The Family Man” Study Guide:

Economic/Business Principles:
Holiday discounts often improve floor traffic and sales volume, and thus profit.
Discounts often increase customers’ feelings of contentment or loyalty.
Economic cost is always bigger than accounting cost.
The opportunity/cost principle: each opportunity means the sacrifice of a different opportunity.
In big companies, or while making a big deal, work-concerns often come first, even over holiday celebrations and personal concerns.
A businessman has many responsibilities to his clients and to his employer.
Buy low and sell high.
Positive motivation inspires employees’ work enthusiasm.
Value is not only measured by financial aspects but also by utility (i.e., by cost as well as by the value derived from use).
The business model has largely shifted from being performance-oriented to being relationship-oriented (i.e., price and quality are often trumped by a good relationship with clients).
The key to a successful business is knowing how to deal with people.
Business deals should be win-win.
Business-people must learn to prioritize.
High-paying jobs often also come with high levels of stress.
Employees sometimes get perks in addition to the salary and bonuses.
Business centers are generally also in the city center.
The head person is usually critically important when a big decision must be made.
In America, many “serving people” (like Jack’s doorman) get tips as well as a salary.
Many business transactions involve written receipts or contracts.
Becoming a supplier for a big business can be a huge opportunity for a small business.
Extensive preparation helps a job-hunter in an interview.
A good manager knows his employees and develops their potential abilities.
When having a meeting, we should not daydream.
What you wear affects the way your customers and co-workers see you.

Ethical Principles:
Your children won’t like being the last ones picked up.
Be kind: it often leads to benefits for you too.
True love is faithful to a spouse.
True love never gives up.
Racial discrimination/prejudice is wrong.
A man should take his family into account when making major decisions.
Love puts the other person first.
Love must sometimes be blind or deaf.
Love requires sacrifice.
A one-night stand isn’t love.
Good people risk their own lives (or happiness, career, etc.) to help or save others.
A bird in the hand is worth two in the bush.
Happiness is more often related to treasuring what you already have than in finding more.
Truth often confronts us when we are looking for something else.
Everyone is in need of something; good people help others meet those needs.
An open-minded person can find blessings in unexpected places.
One choice can change your whole life.
When giving gifts, “it’s the thought that counts” (not the price).
Cherish love and friendship over money.
When confronted with a dangerous situation, evaluate the risks before you intervene.
Do not disappear from your family without a word.
Don’t forget your wedding anniversary!
You don’t need expensive clothes to feel like a “better/good” person.