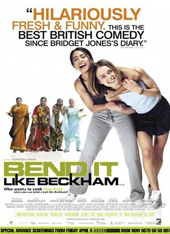 Story: No one plays soccer like Beckham, and a young woman shouldn’t play soccer at all—at least, not according to two traditional moms in this British comedy. Our past and heritage certainly affect our future, so how can we honor our parents and still reach for our dreams in this multicultural modern world? In this story, Jess loves football (soccer) and she is good at it, but her mother thinks that “good Indian girls” don’t run around playing sports, showing bare legs, etc. To complicate matters, Jess’ dad was the victim of prejudiced treatment (RE the sport of cricket), making it hard to trust “white” athletes. Meanwhile, local Brit Jules has problems of her own, with a mother who thinks she should be more feminine. Add interracial romance, nosy friends, misunderstandings, and an Indian wedding, and the result is a fun movie that can open your eyes to the complications your neighbors might be facing every day. Let the footballs fly! (2002; Keira Knightley, Parminder Nagra; Kintop Pictures; sports, comedy, drama, inter-cultural. romance; PG-13; 112 min)

Setting: London mostly (one soccer game is in Germany)

Another summary: A comedy about bending the rules to reach your goal, Bend It Like Beckham explores the world of women’s football, from kick-abouts in the park to free-kicks in the Final. Set in Hounslow, West London and Hamburg, the film follows two 18 year olds with their hearts set on a future in professional soccer. Heart-stopping talent doesn’t seem to be enough when your parents want you to hang up your football boots, find a nice boyfriend and learn to cook the perfect chapatti. [Written by Anonymous, at IMDB.com]

(When they get back to England, Jess’ parents are waiting for her. When showing this film in class, this is a good place to stop on the first day. About 50 minutes in with 55 left.)

Your sister is getting married. She needs you.

A phone rings at the engagement party, and EVERYONE checks to see if it’s their phone!

Since she was a child, Jess has played soccer with the boys. And she is GOOD at it.

Good Indian girls don’t show off their bare legs; they learn to cook, and they obey their parents.

Driving by, future in-laws mistakenly think they see Jess kissing an English boy, and they call off the wedding.

Jess’s coach comes to tell her parents about her great talent.

Jess lied so she could play soccer; here, her Dad finds out!

–Much of the movie’s plot centers around the main characters’ goal of going to the USA to play professional soccer for the Women’s United Soccer Association (WUSA), and highlight clips are shown of several of the league’s superstars. On 18 September 2003 – just seven weeks after the movie’s official release in the United States – WUSA suspended operations due to financial problems. (According to Wikipedia in 2014, the league never recovered; other women’s soccer leagues include the Women’s Premier Soccer League and the W-League.)

–Director Cameos, Gurinder Chadha: You can see the movie’s director dressed in pink, in the conga-dance line at the wedding, while Jules & Jess are jogging, and at the party the night before the wedding (she is in the circle of relatives clapping, wearing a blue suit).