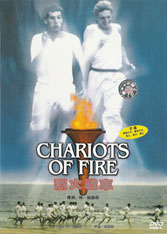 Story: The first China-born Olympic medalist was Eric Liddell (born in Tianjin, China). This film tells the story of Eric Liddell and Harold Abrahams, leading up to the 1924 Olympics. Along the road to victory they face life-changing choices when conflicting demands come from family members, friends, leaders, rules, traditions, outdated ideas, heritage, faith, country, and their own convictions. Where does the power come from, to see the race to its end? Watch this classic film and find out! (Eric returned to China from the UK in 1925; his fame raised money to build Tianjin’s Mingyuan stadium [demolished 2012]; he served as a teacher and doctor until he died in a Japanese camp for foreigners in 1945.) (1981; four Oscars including Best Picture; Twentieth Century-Fox; drama, sports, history; PG; 123 min)

Note 2: Another technique this film uses a lot is slow motion; that is, a 10-second race takes 30 seconds, so you can see more details. This technique also emphasizes the lonely feeling and nervousness that runners feel just before a race.

Note 3: Until 1986, professional athletes (i.e., athletes who earned money for participating in sports) were not allowed to compete in the Olympics. In the early days, they were not even allowed to hire a personal coach. This is one of the issues in this story.

Note 4: At one point, Harold says that Eric “runs like a wild animal”—this is historically true! The actor had a hard time imitating Eric, whose arms swung wildly and whose head tilted back so far that he couldn’t really see the track!

Note 5: As you watch, think about the things you must struggle with to reach your potential. Eric’s parents supported his “running” but his sister saw it as a distraction; Eric’s religious beliefs also kept him from running on Sunday (“the Lord’s day”), and his countrymen called him a “traitor” for loving God more than he loved his country. Harold’s struggle was mostly with ethnic prejudice and with university leaders whose “amateur only” policies forbid athletes from hiring a personal coach. You probably face different challenges, but watching these “legends” can help you see a way forward, no matter what you struggle with!

Comments from a former student:

Chariots of Fire is a movie that wants to show us a kind of “spirit of fire,” and it contains so many things: faith, victory, belief, struggle, love…. It’s what a good movie should have. You do not have to be a sports fan to appreciate the movie. You just have to have a heart. You have to bear minutes of intense running without taking a breath.          –Allen (2004 NPU)

(from http://www.imdb.com/title/tt0082158/quotes;imdb’s website is a great place to find movie facts and more; blue indicates a key dialog or sentence)

Note: some of these have been shortened or simplified a little for my students (especially if marked with *); others stick to the subtitles even if they aren’t exactly like the dialog.

Say these dialogs out loud with your friends; it will help you prepare to watch the movie. Underlined terms are in the vocabulary section above. 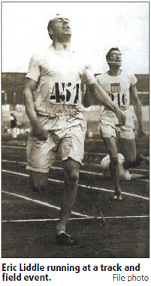 Here are some more websites that can tell you about Eric Liddell, especially in relation to China.

Broken link: http://www.times-olympics.co.uk/historyheroes/stgbo01.html    At one time, this website said: “In 1991, more than 40 years after he died and a decade after his life was immortalised on celluloid [film], a small headstone was unveiled at Liddell’s previously unmarked grave in China’s Tientsin province*. An appropriate text, just a few simple words taken from Isaiah, formed the inscription: ‘They shall mount up with wings as eagles; they shall run and not be weary.’”

*[Tianjin Municipality; I understand that the marker is actually at a middle school in Weifang, a prefecture-level city]

Some interesting details from a book:

–Eric also won a bronze medal in the 200 meter race.

–The day of the 400 meter heats was 45 degrees centigrade. Two men (one Swiss and one Brit) had broken the world record during the heats (48 seconds). Eric was the shortest of the six finalists (2 Brits, 1 Canadian, 2 Americans, and 1 Swiss).

–The day after his victory, the same Scottish newspapers that had called Eric a coward and traitor for refusing to run on Sunday, were now showering him with praise and calling him a national hero.

Below is a quiz I gave to former students about the movie. Try it (it is not very difficult) before you look at the answers!