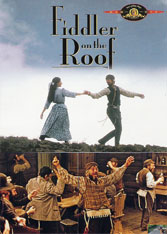 Fiddler on the Roof, www.EFLsuccess.com

Story: How far can people bend their traditions to make room for love and progress? This international musical stage sensation tells the life-affirming story of a poor Jew (with five daughters!) whose love, pride and faith help his family face the oppression of pre-revolutionary Russia. You will laugh, cry, and want to join the singing in this three-hour movie. (1971; 3 Oscars + 5 nominations; starring Topol; United Artists; musical, drama, romance, comedy, history; rated G; 3 hr–1:52 to the intermission + 1:09)

Setting: In the early 1900s, Russia’s ruler (the Czar) was living in luxury while the common people had to scratch out a living. The winds of change were blowing, but change comes slowly to Jewish (犹太人) families in the sleepy village of Anatevka whose traditions have long helped them keep their balance.

Note: I’ve had students ask why Russian Jews speak English. American movies often make it look like everyone can speak English, but this is just for viewers’ convenience. (They probably spoke Hebrew or Russian among themselves!) You should also note that, throughout the story, when the main character looks up and talks to “nobody” he is really praying (talking to God).

Jobs important to the story

(from memory and from http://www.imdb.com/title/tt0067093/trivia?tab=qt&ref_=tt_trv_qu; blue indicates a key dialog or sentence)

Say these dialogs out loud with your friends; it will help you prepare to watch the movie. The underlined words are defined in the vocabulary section above. Note: These may not be in the correct chronological order. Some are here simply because they are funny, and non-native speakers might not understand them without help.