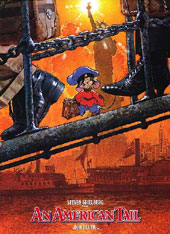 Story: This charming Stephen Spielberg cartoon tells the story of mice who immigrate from Russia to America (in 1886, because of persecution from dangerous cats). Lured by tales of unlimited opportunity and “no cats,” the Mouskewitz family (of mice) sails to the USA. During the voyage, their son Fievel falls overboard. Then, as they try to find each other in New York, they discover the hardships of immigrant life (and lots of cats!); but don’t worry, there’s a happy ending! (1986; Spielberg, Bluth, DeLuise, Kahn, Plummer; Universal; cartoon, comedy, history; G; 80 min)

Note 1: At this time in history, US immigration officials sometimes changed people’s names when they arrived in the US, often because they could not pronounce or spell the correct name. (See “Mousekewitz” under “People and proper nouns” below; also see dialog 5.)

Note 2: To show that Gussie (a rich NY mouse) speaks with a strange accent, the subtitles show her words spelled wrong [e.g., “wally” instead of “rally”; “wewease” instead of “release”; “get some sweep (sleep)”; “we have a wong (long) day ahead”]. This will make it hard for English-learners to understand her, but most of the time “w” is supposed to be an “r” or “l”—remember that, and you will understand a lot of her speech (and Gussie should also remind you that proper pronunciation is important for you!).