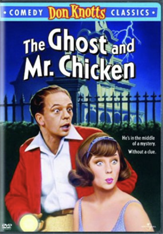 The Ghost and Mr Chicken, www.EFLsuccess.com

Story: Luther, a timid typesetter for a small town newspaper, gets a big break when the editor asks him to spend a night at a haunted mansion, 20 years after a murder. Local citizens call Luther a hero after he writes about his ghost-filled adventure, but the owner sues the newspaper for libel. Misunderstandings, exaggerations, courtroom foolishness, shy Luther’s love for Alma, and the many funny faces of comedian Don Knotts bring lots of laughter as the real mystery unravels around our reluctant hero. As the tag line says, Luther is in the middle of a mystery, but he doesn’t have a clue! (1966; Don Knotts; Universal Pictures; comedy/mystery/romance?; family; 90 min; color)

Note 1: Comedian Don Knotts was a popular star in the 1960s, both on TV and in the movies. He represented “the common man” who is a bumbling yet trusted friend and sometimes becomes an unlikely hero.

Note 2: Several of the characters live together in a boarding house. This was not un-common in the 1960s, but I suspect that the boarding house was used in this film to allow characters to interact in a way that would have been difficult otherwise.

The town has a haunted mansion.

Luther’s assignment is to explore the deserted mansion.

Passing the portrait of a lady murdered two decades earlier.

The organ plays by itself!

Garden shears appear in the portrait!

(mostly from http://www.imdb.com/title/tt0059221/quotes; imdb’s website is a great place to find movie facts and more. Blue type shows “key” dialogs. (When presenting these dialogs in class, I let a student act as “narrator”, reading things in brackets.)

Luther isn’t used to being popular with the ladies.

A kiss for good luck.

The Judge orders everyone to the haunted mansion, to see for themselves.

Luther returns to the haunted house.

Mr. Chicken finds himself in the middle of a mystery…without a clue!

Dialogs, part 2 (to the end of the film)

Although this film is a comedy, it also presents some good “life lessons.” Here’s my list. Tell your partner where you saw these in the story. Then add more principles.