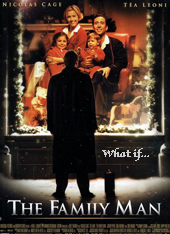 Story: Jack is a rich, successful stock broker. One Christmas Eve, he gets a glimpse of what his life would have been like if he had made different choices. What did he give up by not marrying his college girlfriend and raising a family? This movie will give you a lot to think about, especially if you are a college student who thinks that a good salary is the only thing to look for in a job. (2000; Nicholas Cage, Tea Leoni; Universal Pictures; romance, comedy; PG-13; 2 hr)

Setting: New York City and a nearby New Jersey suburb

Synopsis: Jack Campbell, a successful and aggressive Wall Street stock broker, lives a happy, single life. On Christmas Eve, he meets an “angel” who asks, “What do you need, Jack?” Jack replies: “Nothing; I have everything I want.” Well, the next morning, the “angel” puts Jack in a “glimpse” of what his life would have been like if he had married his college girlfriend, 13 years earlier. In this “glimpse,” he and Kate live in New Jersey (about an hour away from New York City), and they have two children (Annie is about 5 years old; Josh is still in diapers). Instead of being president of P.K. Lassiter Investment Company, he now helps his father-in-law run a retail tire store (he quit his Wall Street job after “Big Ed” had a heart attack, thereby saving the family’s company). Jack’s Ferrari and expensive suits are gone; he now has a broken minivan and “mall-bought” inferior clothing (he calls them “sub-par”). After he realizes that there is nothing he can do to get his “real” life back, he settles into this “glimpse” life, and finds the value of deep friendships, family relationships, and true love. Although he misses the comfort and power of his job in “The City,” he realizes that he never stopped loving Kate (and grows to love his “glimpse” children). He is no longer “confident and sure of everything,” but eventually he decides that “there’s no place I’d rather be” than with his family.

Note 1: Like many American movies, this film contains quite a bit of what some people consider to be “profanity.” Longman’s excellent dictionary says profanity is “offensive words or religious words used in a way that shows you do not respect God or holy things.” In the film, Jack flippantly says things like “God,” “Christ,” and “Holy Mary Mother of God”; but those dialogs do not show any “respect for God or holy things.” If you are around Americans, there’s a good chance that you will hear profanity and cuss words. But as an English learner, it is best to avoid this kind of talk. Many Americans find this language deeply offensive, and if you get into the habit of talking like this, you may offend your professor, potential boss, or someone who might become a close friend or relative!

Note 2: This film was made in 2000, one year before the tragic events of “9/11” (Sept 11, 2001), when terrorists crashed three US airplanes, killing thousands of people. One of the ways that day changed the world is seen in the film. Both “airport scenes” show Jack and Kate with each other, right at the gate as the other boards the plane; Jack even runs down the airport hallways without going through any “security area”. This was common until 9/11; since then, only ticketed passengers are allowed past a security checkpoint.

(some are from http://www.imdb.com/title/tt0218967/quotes; blue indicates a key dialog or sentence) 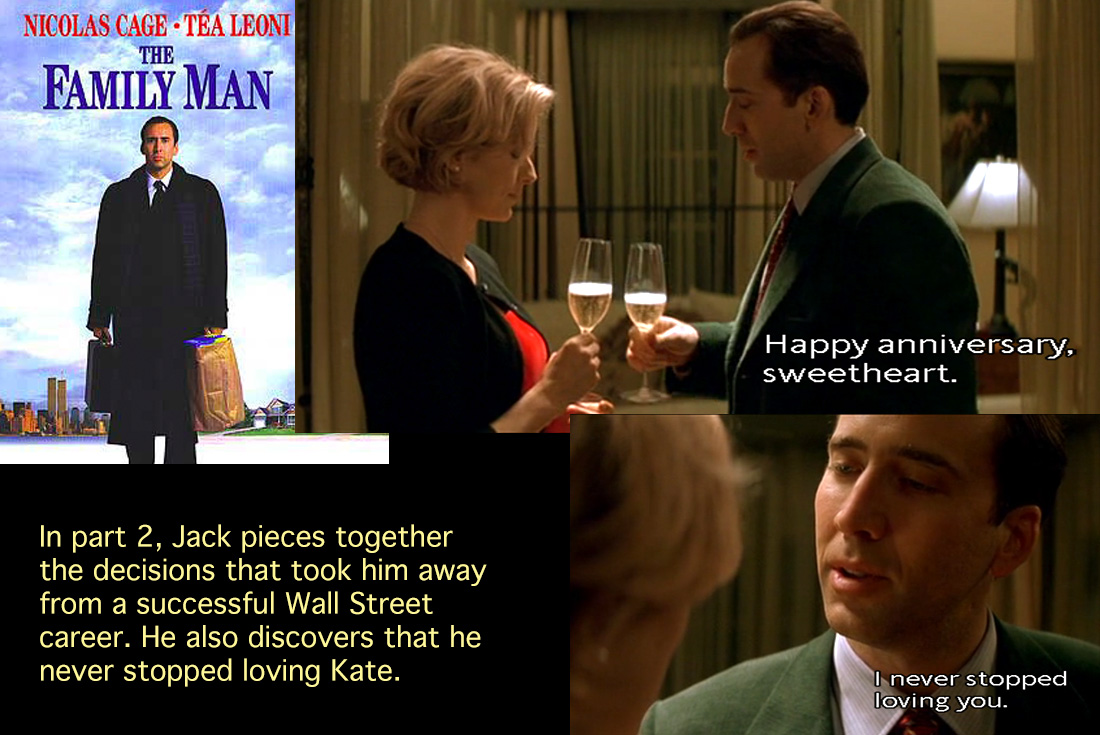 (You can see some of my students’ answers to #4 and 5 at the bottom of the “Rudy” Study Guide.)

The film starts and ends showing us Jack (and Kate) in “real life,” but the middle of the film shows us a glimpse of what their lives would have been like if they had gotten married 13 years before.