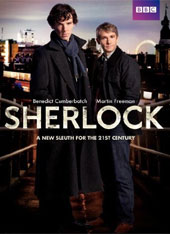 Story: A Chinese pottery expert, a journalist, and a Hong Kong banker have seen graffiti that scares them into hiding. When the latter two turn up dead, Holmes helps the police and bank officials put the clues together, and unlock the meaning of the strange graffiti, but not before bringing Watson and his new girlfriend to within seconds of their own deaths. (For a detailed summary of the story, scroll down to “More information”.)

Note 1: Sherlock Holmes (福尔摩斯) is a fictional detective created by Scottish author and physician Sir Arthur Conan Doyle. Originally set in Victorian England, the stories have been given new life by this BBC series, in which Holmes uses his famous detective skills in 21st-Century London. As you watch, try to see what Sherlock sees—clues that others miss, which solve the case.

Note 2: The fantastic London-based “consulting detective” is famous for his astute logical reasoning, his powers of observation, his ability to use many disguises, and his use of forensic science skills to solve difficult cases. Holmes, who first appeared in publication in 1887, was featured in four novels and 56 short stories (generally published in serial form). The character quickly grew in popularity with the first series of short stories in Strand Magazine, beginning in 1891; the last story appeared in 1927. The stories cover a period from around 1880 to 1914. All but four stories are narrated by Holmes’s friend and biographer, Dr. John H. Watson. (Adapted from: http://en.wikipedia.org/wiki/Sherlock_Holmes, 2013)

(a synopsis to help you understand what you will see; adapted from http://en.wikipedia.org/wiki/The_Blind_Banker; 2013)

At the National Antiquities Museum in London, Chinese pottery expert, Soo Lin YAO, sees graffiti that frightens her, and disappears. Meanwhile, Dr. John Watson is having financial problems, and needs to find a paying job. Sherlock Holmes takes Watson to “the bank”, which turns out to be an important international finance house. There Seb Wilkes, Sherlock’s old university friend, asks for help and promises to pay a large fee if Sherlock can figure out the “hole” in the bank’s security system. Near the top of this high-security building, someone broke in and painted two meaningless symbols on the wall.

Sherlock realises that the graffiti was a message meant for one man – Edward Van Coon of the Hong Kong desk, who (like Soo Lin) has disappeared. Sherlock breaks into Van Coon’s locked apartment and finds him dead. The police, under Detective Inspector Dimmock, regard it as a suicide, though Sherlock sees it as murder. Soon, journalist Brian Lukis is also killed inside his locked apartment. When Holmes and Watson investigate, they find similar mysterious graffiti.

Meanwhile, John obtains a job as locum at a local surgery with Dr Sarah Sawyer, who warns John that the work would be mundane (Watson: “Mundane is good sometimes. Mundane works.”).

Sherlock and John use receipts or a “diary” (BrE for a personal calendar) to trace where each victim went before the murders. They discover that Lukis and Van Coon had both just returned from China, and both went to an oriental curio shop “The Lucky Cat”. There, John discovers that the “graffiti” is ancient Chinese numerals. Sherlock breaks into Soo Lin’s empty flat, where he is attacked. Then they discover similar symbols at the museum and on a railway yard wall, and struggle to decode the messages.

Next, Holmes discovers that Soo Lin has been hiding at the Antiquities Museum; she explains that the code is the work of the criminal “Black Lotus Tong”, of which she was once a member. Unfortunately, before she can decode the message she is killed (and we learn that one of the assassins is Soo Lin’s brother). But Sherlock realises that Van Coon and Lukis were smuggling valuable antiquities from China to London, and were killed because at least one of them stole something. [If you don’t want to know the end of the movie, stop reading here.]

Sherlock figures out that the message is in the form of a book cipher, and he and John spend the night going through the first two victims’ books trying to find a book they both have. John’s first day at work does not go well, as he falls asleep at the surgery. Sarah covers for him, and Sherlock arranges a date at a local Chinese circus, for the three of them. While John and Sarah enjoy the classic escapology and acrobatics acts, Sherlock is attacked backstage; with Sarah and John’s help, they escape. Back at Baker Street, Holmes continues to search for the solution to the book cipher, but John and Sarah are soon kidnapped. The villains believe that John is Sherlock, and they threaten to kill Sarah (with a crossbow) to find out if “Sherlock” has found the missing treasure.

Fortunately, Sherlock finds the solution to the code, tracks the villains to their hideout, and rescues John and Sarah. He also realises that the elusive “treasure” (a jade hairpin) has been in plain sight all the time.

Tea ceremony at the museum

Sherlock and Watson at their flat

First clue, at the bank

Searching for clues at the library

Watson is blamed for graffiti

Sentences/dialogs from the movie (part 1)

Blue parts indicate that they are especially important. (imdb’s website is a great place to find movie facts and more)

Both victims returned from China, and visited the Lucky Cat.

Watson waits impatiently for Sherlock to open the door.

Soo Lin shows the tattoo of the smugglers.

The key to the code is a book they both had.

Sentences/dialogs from the movie (part 2)

Sentences/dialogs from the movie (part 3)

A Chinese “circus” is in town for one night only.

Wrapping up the case.

Security breach is revealed, and Holmes is paid in “five figures.”

Holmes found out that she is more than a secretary.

She can’t believe what it is worth!

The General failed, and won’t live to fail again.