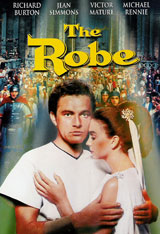 Story: A Roman officer “wins” Jesus’ robe by gambling under the cross. Soon, it seems that the robe is making him crazy. A woman’s love can’t cure his inner pain, but his slave seems to have found a solution. As the soldier sets out to destroy the robe, he discovers the truth behind its strange power. This classic epic is especially popular at Easter time. (1953; 2 Oscars plus 3 nominations; Richard Burton, Michael Rennie, Victor Mature; 20th Century Fox; drama; 135 minutes; first movie released in CinemaScope format) (For a detailed summary of the story, scroll down to “More information”.)

Note: In the first century, Rome ruled the western world. Many of the people they conquered had been enslaved, and those fortunate enough to live in Rome lived in great luxury (at the expense of those elsewhere). The film says that, by this time, “there are more slaves in Rome than citizens,” so there was always fear that the slaves would join together and revolt against their Roman masters. Furthermore, a Roman describes Palestine like this: “It is the worst pest-hole in the Roman Empire; home of a stiff-necked, riotous people, always on the verge of rebellion. For an officer to be sent there is like a death sentence.”

(a synopsis to help you understand what you will see; underlined words are defined above)

Marcellus is a Roman officer and son of a powerful Senator; Caligula is the son of Tiberius Caesar. But first we meet Demetrius, who is being sold as a slave. Caesar’s son wants to buy him to become a gladiator (one who fights to the death for sport), but Marcellus bids more money for him (to make Demetrius his personal assistant—but mainly to irritate Caligula, and it does make Caligula angry). Caligula then has Marcellus sent to the worst place in the vast Roman Empire: Jerusalem, Israel. One of his duties is to supervise crucifixions. While thus executing Jesus, he gambles for his robe, and wins—and soon after starts to act crazy/insane. Diana intercedes for Marcellus (whom she loves), and Tiberius sends for Marcellus, only to find him insane or bewitched. After deciding that it was Jesus’ robe that bewitched Marcellus, Tiberius sends Marcellus back to Israel with these instructions: “Go, find the robe and destroy it, and for Rome, seek out the followers of this dead magician. I want names of every man and woman who subscribed to this treason.” But once Marcellus gets to know some of these “followers”, he begins to think that theirs is a force for good, not evil or treason. Marcellus (and eventually Diana, too) becomes a Christian, seeking to spread and defend his new faith.

Of course, the movie also features fights, death, love, honor, bravery, confusion, rebellion, compassion, and all the other things that make a story great, leading up to a memorable and surprising conclusion. The film was so popular that it led to a sequel called Demetrius and the Gladiator.

Historical note (according to IMDB.com, 2012): The Roman Emperor Caligula is depicted in this movie as persecuting Christians. However, he reigned from AD 37 to 41, while Christianity was still a very “new” religion with most of its followers in the eastern Mediterranean. The first mention of Christians from the perspective of the Roman government, according to the Roman historian Suetonius, wasn’t until the reign of his successor Claudius (reigned AD 41-54). The first major incidents of persecution of Christians did not occur until the reign of Emperor Nero (reigned AD 54-68).