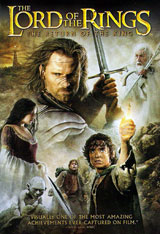 The Lord of the Rings (3)–The Return of the King, www.EFLsuccess.com

Story: Movie adaptation of JR Tolkien’s timeless novel, winning 11 Oscars, including Best Picture. Frodo, Aragorn, Gandalf and their friends are engaged in a classic struggle between good and evil, and more importantly, the struggle we each face in doing what is right for our friends, our countrymen, and ourselves. Lots of thrilling action, great New Zealand scenery, CGI evil creatures, enchanting music, and unforgettable characters. (Lord of the Rings III; 2003, New Line Cinema; Peter Jackson, Director; drama, adventure, romance; 3:15 hr)

Warning: Lots of ugly creatures appear in this film, lots of people (and creatures) die in extended battles, severed heads are shot back at their countrymen, a finger is bitten off, flying dragons pick up horses and men and throw them down to their deaths, and one of the dragons has its head cut off; you see dead people (ghosts) who are not dead, and you’ll see a battle with a huge, evil spider. Therefore, this movie is not for people with a weak stomach or who don’t like war movies!

The story is quite complicated, but it will help if you can remember the different names each person has! Some students say it is very helpful to print this list of characters!

The story centers on a “ring of power,” which had been created by an evil creature (Sauron) to give himself power over all Middle Earth. The evil ring makes the wearer invisible, heightens his senses, and also stops the aging process for its owner; in Sauron’s hands it also had vast destructive power.

Centuries before, in a great battle, a human king (Isildur) cut the ring off Sauron’s hand. He should have destroyed the ring by throwing the evil thing into a volcano (Mount Doom), but he “was weak” and decided to keep the ring (hoping that he could use its power to rule). His descendants, and all the creatures of Middle Earth, have suffered ever since. Then the ring was lost, and many years later it was accidentally found by a Hobbit, and another Hobbit (Smeagol) murdered the finder and stole the “precious” ring (you see this as a flashback at the beginning of movie #3). Years later, Smeagol loses the ring, and another Hobbit finds it (Bilbo Baggins). This is the subject of an earlier book by JR Tolkien (The Hobbit).

A good wizard (Gandalf) figures out that this is the long-missing evil ring. He and other “wise” creatures (men, elves, a dwarf) won’t even touch it, fearing that they cannot resist its evil power. But the race of Hobbits are simple folk who are very humble. Bilbo doesn’t seem to be affected by the ring’s evil power, and when he is old he gives the ring to his nephew (Frodo Baggins). At this point, the evil power of the ring “wakes up,” and a council of wise leaders decides to let Frodo try to destroy the ring in Mount Doom—with the help of eight brave companions (the Fellowship of the Ring; movie #1).

Of course, evil Sauron (who does not know about the plan/attempt to destroy his ring) wants it back so he can rule Middle Earth. He, too, has helpers—an army of evil creatures, Nazgul & Orcs (see “People and proper nouns” above), a bad wizard, evil men, pirates, mercenaries, etc. Frodo doesn’t have much hope of succeeding in his task, but the “good” folks of Middle Earth really don’t have much choice. They must let him try. So, the story is about Frodo trying to get to the volcano to destroy the ring, while Sauron and his evil army try to destroy Middle Earth (and if possible, capture the ring too).

Isildur’s heir (Aragorn) is the rightful king of one of the countries in Middle Earth, but because his ancestor chose not to destroy the ring, the family has been hiding in shame (and Aragorn is afraid that he would be just as self-centered as his ancestor). Meanwhile, the people wait for the “return of the king”—who they hope will free them from Sauron’s evil power and bring peace to Middle Earth.

In the third film, Sauron gathers a vast army to attack the humans; Aragorn and Gandalf also put together an army of men, elves and “undead” warriors (men who promised to help Aragorn’s ancestors but didn’t, and were cursed with an inability to “rest in peace”). The story moves back and forth between these armies/people and Frodo (with Sam and Gollum), on their quest to destroy the ring in Mt. Doom.

Aragorn is in love with an elf princess (Arwen), and she loves him so much that she is willing to give up her elfish immortality to become his wife. (This does not make her father, the elf lord, very happy!) Most of the love story is in the first two movies.

Mixed into this story are smaller stories about friendship, sacrifice, love, power, fear, hope, leadership, shame, good vs. evil, the deep influence “evil” has to make “good” creatures into “bad” creatures, and the equally great power that self-less acts of “goodness” have to change the lives of others.

Hints as you watch:

There are a lot of words that don’t really mean anything (or are no longer used), but you can tell by the actors’ tone of voice that they are there for their derogatory value (i.e., to show criticism or displeasure).

There are some Old English words (that aren’t used much anymore): e.g., forth=forward, ere=before, nought but=in nothing except, aye=yes, my old Gaffer=an old man or boss, or possible father?

From time to time they quote prophecies about what would happen one day.

Gollum uses non-standard English (like someone who has forgotten his mother tongue), so don’t try to “learn English” from Gollum! E.g., he says “Orcses” instead of “Orcs” as the plural of “Orc,” and he misuses verb tenses. Perhaps the author does this because he wants us to pity Gollum. Remember that he owned the ring for a long time, and his life is “bound” to the ring’s evil power.

Remember that Frodo and Sam (Frodo’s best friend) don’t know what is going on with Aragorn and the people with him. They went in separate directions at the end of the first movie. Frodo thinks that Gandalf is dead, so their reunion at the end is a big surprise. You also see Frodo’s uncle Bilbo Baggins at the end (he is about 125 years old).

There are a lot of names. When you see a capitalized word, remember that it is a name so you won’t waste mental energy trying to figure out what it means. (Aren’t you glad English capitalizes names? I’m glad that modern Chinese sometimes underlines “translated” names!)

(I ran out of time to check the following quotes, which are probably not in the right order! Maybe someday…)

You are here: Lord of the Rings–Return of the King > §-EFL Movie Study Guides > 页-The Latest > EFLsuccess.com