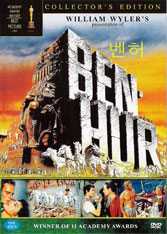 Note: This Study Guide was prepared for the 1959 classic film, not the 2016 re-make; but you might find the new film’s web resources helpful.

Story: Winning 11 Oscars (1959), this is one of the greatest movies ever made (it is certainly one of our favorites). Boyhood friends in ancient Rome/Judea grow into power and wealth, but injustice makes them bitter rivals. Messala mercilessly enslaves Ben-Hur, casts his mother and sister into prison (where they all-but die), and tortures the family’s steward. Love, riches, athletic victory, and even revenge can’t free Ben-Hur from hate. Only a miracle can save him. This movie includes great action/battle scenes and a seat-gripping chariot race; the filmmakers employed 8000 actors and had a staggering budget; as you watch, you’ll be amazed that they could do all this without computers! (3.5 hours! Romance, action, drama)

Note 1: The story came from a popular 1880 novel by US General (& Governor) Lew Wallace (1827-1905). One of the best selling books of the 19th century, Ben-Hur: A Tale of the Christ has never been “out of print.” You never see Christ’s face in the film, but his role in Ben-Hur’s life is central to the story.

Note 2: The author (Lew Wallace) says that before an 1876 conversation with an atheist, his “attitude with respect to religion had been one of absolute indifference.” That conversation compelled him to begin seven years of historical research. The results, in his own words, were “first, the book Ben Hur, and second, a conviction amounting to absolute belief in God and the Divinity of Christ.” (from http://www.ben-hur.com/FirstChristmas.pdf, and when that didn’t work in 2014 I found it at http://www.ben-hur.com/meet-lew-wallace/ben-hur/)

For additional questions & information, download a longer study guide from http://roserwilliams.com/Study%20Guide%20for%20Ben%20Hur.pdf, the personal website of Rose Williams, a Latin teacher. Rose draws attention to many interesting points, including the differences between Romans, Jews and Arabs, the role of music in the film, and the important symbolism of water as “the symbol of life.” She also provides a lot of discussion/reflection questions.

Introduction to the story and times:

Judah Ben-Hur is betrayed by his best friend, which makes him lose his wealth and become separated from his family. When Judah is condemned to “work to death” as a galley slave aboard a Roman warship, he prays for revenge. But even more important than “getting revenge” is Judah’s desire to find his imprisoned mother and sister.

The story takes place at the beginning of the first century, mostly in the country of Judea (now Israel). Rome’s armies have expanded the Roman Empire to dominate the nations around the Mediterranean Sea and beyond.

The film begins with the birth of Jesus (the Christmas story). We see three men from different parts of the world, who met each other in a desert near Judea. Each has been drawn by a new star that they believe to proclaim the birth of a new king in Israel. One of the men is called Balthasar, an Egyptian from Alexandria; Balthasar’s relationship with Judah Ben-Hur is also central to the story.

The story picks up 21 years after “Christmas” (i.e., in AD 21), when Valerius Gratus became the fourth Roman governor of Judea. These strict, often merciless governors were locally unpopular, leading to a long, bitter quarrel between the Romans and the Jews. (In AD 70, the Romans forced Jewish people out of their land, and the Jews did not have the right to return and rule themselves until AD 1948, when the United Nations gave Israel statehood.)

In the movie, Gratus arrives with a young Roman officer. This officer, Messala, had been Judah’s childhood friend. Messala went to Rome to be educated, and was now back as a vain, proud, power-hungry “Roman.”

The country of Judea is the home of the Jewish (or Hebrew) people, who believe in “the one true God: Jehovah.” Their holy writings predicted that a “son” (i.e., descendent) of their greatest king, David, would one day save them from their enemies and establish “the kingdom of God” on earth. Judah Ben-Hur and many people in his day expected this king (or messiah) to end Rome’s abuse and domination. But the holy writings also indicated that the promised messiah would be a humble servant who suffered for the people, in order to free them from their real enemy (not Rome, but sin). Interwoven in Judah’s story is the story of the peace and love offered by a Jewish Rabbi (teacher) called Jesus of Nazareth, a “son of David” who Christians believe to be the promised one. From the opening “Christmas” scenes to the ending crucifixion, the movie provides glimpses into Jesus’ life and impact.

(in part from IMDB: http://www.imdb.com/title/tt0052618/quotes)
*some of these have been shortened or simplified a little for my students