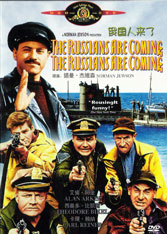 The Russians are Coming, www.EFLsuccess.com
“Dear Mr Krigline:
Thanks for inviting me to watch The Russians Are Coming. It was very funny and also made me think. I did enjoy it a lot.” –Alma (Michael’s KMU student in 2007)

Story: A comedy from the tense days of The Cold War, this film shows us the effects of national pride and international fear, as well as what universal compassion can do to help us overcome our differences. In the 1960s, panic spreads when a Russian submarine gets stuck near a small US island. Will this accident start a war? This movie will make you laugh AND think! (1966, starring Alan Arkin, Brian Keith, Carl Reiner, Jonathan Winters; a Norman Jewison MGM production; comedy; 2:05 hours)

(For story details, read the synopsis at the end of this file.)

Note 1: From the end of World War 2 until the early 1990s, the USA and the Soviet Union (Russia) were in what was called “The Cold War“—a tense time when both sides were afraid that the other would start World War 3, and “end life as we know it” due to nuclear weapons through “Mutually Assured Destruction” (appropriately nicknamed MAD). This movie was made during that time, and perhaps played a part in helping people get over their irrational fear of people they had never met.

Note 2: To stress that they were not Americans, the filmmakers show the Russians speaking non-standard English. The fact that native speakers have no trouble understanding them should help you see that English-learners can make many mistakes and still communicate! (See “non-standard English” below)

(examples from this film)

The progression of the rumors that leads to panic:

(some are from IMBD: http://www.imdb.com) Blue type shows “key” dialogs. (When presenting these dialogs in class, I let a student act as “narrator”, reading things in brackets.)

Stuck on a sandbar

Local police have to deal with fear that feeds on rumors.

In disguise, Russians prepare to walk through town. “If stopped, say: ‘Emergency, everybody to get from street!'”

Trying to get free from the sandbar.

Lighter moments in this sometimes-intense film.

There really are Russian!! They’re shooting on the East Shore Road!

The important role of an interpreter!

Captain: Bring my crew or I’ll blow up the town!

Kids want a better look from above.

Fendall finally gets through to the Coast Guard.

At the end of a summer during the Cold War (1960s), a Russian submarine draws too close to the New England coast because its captain wants to take a look at America through his periscope. The ship then gets stuck on a sandbar near an island off Cape Cod, Massachusetts. Rather than use the radio to get help, and risk an embarrassing international incident, the captain sends a nine-man landing party (headed by his second-in-command Lieutenant Rozanov) to find/borrow a “power motor boat” big enough to help free the sub from the sandbar. The men arrive at the house of Walt Whittaker, a vacationing playwright, just as the family is packing to return to New York City.

Walt’s troublesome son first sees the group (all wearing black clothing), and imaginatively concludes that they are Russians, but no one believes him until they knock on the door, saying that they are Norwegians. When Walt refuses to assist them, Rozanov draws a gun and promises no harm if the family provides information about military on the island (none) and police force (small), and gives them keys to their car. Walt and Elspeth provide the answers and the keys, and the Russians depart, leaving behind a young sailor, Alexei Kolchin, to guard the Whittakers and (later) Alison Palmer, their attractive 18-year-old babysitter.

The Whittakers’ car quickly runs out of gasoline on a rural coastal road, forcing the Russians to walk. They make it to another group of houses where they steal another car from Muriel Everett, the elderly postmistress. Just as the Russians cut the phone lines, Muriel calls Alice Foss, the gossipy telephone switchboard operator, and before long, wild rumors about an attack by the Russians throw the entire island into confusion. “Maybe they were parachutists” becomes “They’ve captured the airport”, and then “Muriel is dead” and “This whole danged island is under attack by Russians.”

A former soldier (Fendall Hawkins) stirs up the local citizens to get together and fight back, while the level-headed Police Chief Link Mattocks and his bumbling assistant Norman Jonas (played by a comic actor) try to find out the truth behind the rumors and keep the citizens from hurting each other.

Meanwhile, Walt (prodded by his son calling him a traitor) manages to overpower Kolchin, who flees. Walt bikes into town to find help, and later Elspeth and Pete also leave the house; then Kolchin returns, and gets to know Alison and Annie (not as hostages, as Walt will later assume).

Part of the fun in this story comes from switching back and forth between all the confused people: the police, the angry citizens, Walt and his family, the Russians on land, and the Russians on the boat, and a drunk man who is trying to get on his horse so he can “warn the citizens” like Revolutionary War hero Paul Revere.

Many things seem to happen at once. Walt is re-captured by the Russians (and tries to help them so that no one gets hurt). The Russians borrow clothes from a laundry in town, and steal a boat. Other Russians capture Mrs. Foss and disable the island’s telephone switchboard. And Kolchin starts to fall in love with Alison.

Walt manages to free himself, and he and Elspeth return to the house and almost shoot Rozanov, who arrives there just after they do (to get Kolchin). After they talk, the Whittakers, Rozanov and Kolchin decide to head into town together to clear up the misunderstandings.

When the tide rises enough the submarine frees itself, and the Russian captain sets out in search of his missing men. He finds Rozanov and Kolchin in the harbor and threatens to blow up the town unless the other seven are returned to him. This leads to the tense climax of the film. The Russian captain and his weapons are aimed at Chief Mattocks, with the town’s armed citizens pointing their rifles and pistols at the Russians. A single nervous finger could start World War 3!

(If you don’t want to know the end of the story before watching, stop reading here!)

As tension mounts, a small boy falls from his lookout on the church steeple and hangs dangerously from the side of the building. Forgetting their differences, islanders and Russians unite to form a human pyramid and rescue the child.

With peace and harmony established, the submarine heads out of the harbor with a convoy of villagers in small boats protecting it. The stolen boat with the seven missing Russians reaches the submarine shortly thereafter, and is returned to the Americans just before two U.S. Air Force jets arrive. They break off after seeing the convoy, and the submarine is free to sail away—giving us a happy ending!

Note to teachers: To give time for discussion, I use three full class days (6 hours). Day one: preview the vocabulary, show the trailer and up to where Annie comes down the stairs (before he apologizes); read the synopsis (without the spoiler) to the class (I let two students alternate, while the text is on the screen); then assign dialogs to groups, letting the first group “perform” before class ends. Day two: vocabulary quiz (half-page); the rest of the groups perform dialogs, and show to the place where Alice Grilk crashes. If there is time left, add one or two discussion questions. This will leave a bit less than an hour for the last day, so you have time for several discussion questions.

Partial answer to discussion #6: when Walt took away Alexei’s gun (though his wife thought this was foolish, not brave); when the men went through town to create a diversion; Alexei’s decision to go back to the house; when the chief stood up to the captain; when Alexei climbed out on the gutter on the steeple; the escort)

You are here: The Russians are Coming > About Ready > 页-The Latest > EFLsuccess.com