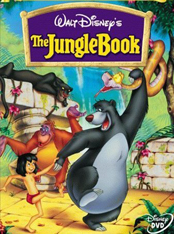 Story: The jungle is filled with laughter, song, suspense and friendship, in one of the funniest and best cartoons Walt Disney (1901-1966) ever made. A human orphan is raised by wolves, but when a tiger threatens the wolf pack, leaders decide that the best place for Mowgli is the man-village. When young Mowgli runs away (so he can stay in the jungle), it becomes a race to see who will find him first: his friends (including a panther, bear and elephant herd) or his enemies (a snake and a tiger). Add great songs, colorful animation, and wonderful lessons on contentment and friendship, and you get an unforgettable movie night! (1967; Disney Studios; cartoon, comedy, musical, adventure; G; 78 minutes) (This was the last cartoon Walt Disney worked on; he died before it was finished.)

Note 1: English doesn’t have as many “measure words” as Chinese, but there are several “measure words” for groups of animals: a herd of elephants/cows/sheep, a pack of wolves/dogs, a flock of birds, a pride of lions, a school of fish, a gaggle of geese, a litter of puppies/cubs. As you watch the film, how many such “measure words” can you find?

Note 2: India is located in Southern Asia bordering China, Burma and Pakistan (among others). India is slightly more than one-third the size of the US (or China). The capital is New Delhi. The climate varies from tropical rainforest in the south to temperate in the north. [from the World Factbook; cited at www.capitolarts.com/pdf/junglebooksg.pdf; this link didn’t work in 2010)]

Synopsis: The following summary is adapted from http://www.gardearts.org/doc/6/Disney%20Kids%20Cinderella-Jungle%20Book.pdf; titles in quotation marks are songs.

An orphaned boy, Mowgli, is raised by wolves in an Indian jungle, but when Shere Kahn (the tiger) returns to that part of the jungle, Bagheera (the panther) plans to guide Mowgli to the safety of the man-village. Kaa (the snake) interrupts their first night. At first, Bagheera doesn’t notice Kaa, but he wakes up just in time to divert Kaa’s attention; then Mowgli pushes the huge snake out of the tree. Next they encounter a herd of elephants (“Colonel Hathi’s March”), and Bagheera rescues Mowgli one more time. Then they meet Baloo (a lazy bear), who “adopts” Mowgli. While Baloo is singing (“The Bare Necessities”), a group of monkeys kidnaps Mowgli. The monkeys take him to their leader, King Louie. King Louie tells Mowgli that he wants to learn how to be a man (“I Wan’na Be Like You”). While King Louis is singing, Baloo (in disguise) distracts the monkeys, while Bagheera rescues the boy. Bagheera convinces Baloo that Mowgli isn’t safe in the jungle, but when Baloo tells Mowgli, he runs away again. Mowgli is tricked and caught by Kaa (“Trust in Me”), but gets away. When hope is almost gone, Mowgli is befriended by the Vultures (“That’s What Friends Are For”). Shere Khan arrives, but before he can attack, Baloo appears, rallying the Vultures into battle. The battle is exciting, and it has a surprise ending I don’t want to spoil! Eventually, Mowgli “accidentally” ends up at the man-village, where a beautiful girl (Shanti) makes Mowgli face the choice between his desire to stay in the jungle, and this new feeling of wanting to be near Shanti and people of his own kind.

(there are more at http://www.imdb.com/title/tt0061852/quotes; imdb’s website is a great place to find movie facts and more; blue indicates a key dialog or sentence)

“Part 1” is half the film, stopping just after the escape from the monkeys. (after Baloo says: “That’s what I call a swinging party!” 39:20)

Part 2 (watch the film before reading these)

*This is a quote from Jesus in the Christian Bible. Reference: John 15:13