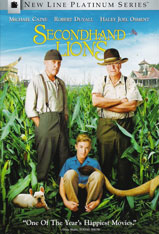 Story: Are old lions still dangerous? Two formerly-lion-like bachelors (Hub and Garth) end up taking care of a deserted nephew (Walter) and a “used” lion. Little by little the stories of their amazing lives (and endless supply of cash) unfold—filled with adventure, romance, exotic lands and treasure. But is it all true? Like all of us, young Walter discovers that part of growing up is deciding who to believe. (starring Robert Duvall–Hub, Michael Caine–Garth, Haley Joel Osment–Walt; New Line Cinema, 2003; 2 hours; comedy, drama) 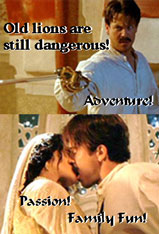 Helpful background information: Walt (the boy) does not have a father. His mom also lies to him a lot. One summer she decides to leave her son with two rich uncles (whom she hardly knows). She wants to be free to date a man, and hopes that the uncles will “like Walt so that when they die they will give him money.” During the summer, Walt hears unbelievable stories about his great-uncles’ lives in Africa. They also tell him some of the things “a boy needs to know in order to become a man.” Some common guesses about where the uncles’ money came from are: (1) in the 1920s they were hit men for Al Capone and the Mafia; (2) they were bank robbers in the 1920s; (3) they got rich by fighting a rich Arab, after rescuing a beautiful woman from his castle (in defeat, he gave them lots of gold); (4) they lived in a “state nuthouse” (mental hospital) for many years, and got the money from a law suit.

Note: The movie frequently uses hyperbole to add humor (i.e., exaggerations of movement or activity). For example, when the lion escapes, everyone in the family gets a gun and goes after it (including the children!). In “real life” you would not give a gun to a child, and two bachelors would not own about 10 hunting guns, so these are both examples of hyperbole.

(A) Walt’s mom was a widow, and in the 1960s there were not many jobs open to women. It was particularly difficult to be a “single mom.” In what ways does this excuse or explain her behavior?

(B) If she HAD been going to a school to learn “court reporting,” do you think she should have taken her son along, or found someone (like the uncles) to watch her son for a few weeks? Explain your answer.

(C) In what ways has life gotten easier for women since the 1960s (in your country; in the world)? In what ways is life still more difficult for women than for men?

(D) The UK, India, and many other countries have had a female Prime Minister or President. Do you think your country will ever have a female “top” leader? Why or why not?

(E) Talk about the older men or women in your life (those who are at least 35 years older than you). What did you learn from them? In what ways was it difficult to be around them (how were they “odd” or “strange”). Why is it important for children to be around older people?

(F) At first, Walt believed that he was going to have a miserable summer with his uncles, but by the end of the movie he loved them and chose to live with them. Tell your small group about a time when your belief about something changed.

(G) Re-read “My favorite dialog” below. Where do our beliefs and values come from? Most people experience a change in “what they believe” over time throughout their lives. In what ways is this good or bad?

(H) Are there things that ALL people in the world should believe in, or does there have to be a difference because of culture? Explain your answer.

(J) How many of the following do you think most of the people in the world would agree on as being “good rules” for all people:

1. Do not crave or long for someone else’s house, clothes or other possessions.
2. Do not lie in court or say untrue things if that will bring harm to your neighbor.
3. Do not steal.
4. If you are married, do not sleep with anyone except your husband or wife.
5. Do not murder.
6. Honor your father and your mother.
7. One day per week, take a rest from your normal work.
8. Do not curse or swear. Do not abuse God’s name or use it carelessly.
9. Do not worship images or statues, because the Heavenly Father does not look like anything you can make with your hands.
10. There is only one true God, who created the world and who revealed himself through the Bible. Do not worship anyone or anything else.

(K) Do you know where the list above came from? It is called “the ten commandments,” recorded 4000 years ago as the “basic laws for humanity” (or at least for Jewish people). These commandments also provided the foundation for law in Europe, America and the Middle East.

(L) It is said: “If you don’t have something to die for, you don’t have anything to live for.” What do YOU believe in so strongly that you might risk everything for it?

(M) At the end of the movie, Walt said his uncles had “really lived;” that is, they had really led full and meaningful lives. What do you think Walt was talking about—what had his uncles done that was “really living”? When you reach 70 or 80, what do you hope to look back on?

(This is part of Hub’s “What every boy needs to know to be a Man” speech; Hub used this to respond when Walt said, “I don’t know what to believe in.”)