Maps explain Covid-19 affect across US geography; plus explanation of “red/blue” states and the electoral college.

While looking at the news recently, some maps caught my eye. Our friends abroad may have a hard time understanding how big and diverse the US is. Some find it difficult to understand how the COVID-19 virus affects different regions in different ways, why the “whole country” was never “locked down,” and why the speed of “opening up” is different from place to place. I think these maps help explain it. But you should also understand that a rural “county” may contain several small towns, while a major city (like Atlanta, Georgia) and it’s suburbs normally spread across several counties.  I wanted to see how Covid-19 is affecting the counties where my family lives. We all live in cities, though not “huge cities” like New York. Meanwhile, I also wanted to see how the virus was affecting a sparsely-populated place. Take a look….

Vivian and I live in the biggest city in South Carolina. (Our daughter and grandchildren live in the next county.) But SC is not heavily populated, so our county has only about 1000 cases. Beach communities have lots of visitors, so the virus spread more widely along the coast. Meanwhile, my brother lives where we grew up, southwest of the “big city” of Atlanta (which is a darker red than the city where I live). But his town is far enough away to avoid a lot of the sickness.

My sister lives in a suburb of Washington DC, so that county has four times more cases of the virus than the county I live in. My son and his wife live outside Pittsburg, which is a moderate-sized city. Their county has half the cases of my county. Meanwhile, Mom lives in a mid-size county in Ohio. There are twice as many cases as my brother’s county. You can also see that many people live in “small cities” in the NE corner of Ohio. But look over at New York City – the number of cases there are FAR bigger than anywhere my family lives.

Finally, look out in South Dakota: 2231 (or 80%) of the cases in that sparse but geographically-large state are in ONE county. But if everyone in the state is asked to “stay home,” it means that many thousands of people in small towns with zero cases are out of work. So, those areas are getting back to “normal” sooner; for people in New York, it may be months before it is safe to loosen restrictions. (The news sometimes tells how people in rural America are making medical supplies, packing meat and doing other things to help the rest of the country.)

During the pandemic, you should be able to find updated maps on the Johns-Hopkins University and Medicine website: https://coronavirus.jhu.edu/us-map

These maps reminded me of another “county by county” map. The other night, an international student asked why some states are called “red states” and some are called “blue states.” Trying to keep it simple, we explained that “red states” voted for President Trump and “blue states” voted for Mrs Clinton in the 2016 election. In other words, “red states” had more “Republican” voters (and likely have a Republican Governor) while “blue states” have more “Democrats” (and a Democrat Governor). Ballots are always “secret” and voters can easily switch between parties every time they vote (America also has some smaller political parties, which occasionally have a winning candidate). Since there are congressional elections every two years, plus elections for the US President and for state Governors every four years, the “color” of a state can flip between red and blue, though most states remain pretty consistent over time.

Interestingly, as people flee from “blue” cities like New York and Washington DC, in response to COVID-19, some “red” areas may be “blue” in the next election. This kind of migration recently “flipped” Virginia from being historically “red” to becoming “blue” (though you can see in the map below that the “blue” part is primarily the heavily-populated cities near Washington DC and the state’s capital). Similarly, some wonder if prolonged violence in places like Portland, OR, might “flip” those areas from blue to red.

The following map shows how each county voted in the 2016 presidential election. As you can see from this map, the vast majority of counties voted “red” (for Trump) in the election, but the blue dots are normally cities, where people tend to vote for the Democratic party (Clinton). Most states have more people in small towns or rural areas than they have in a handful of big cities.

Perhaps you’ve heard of the “Electoral College.” It’s a little too complicated to explain it here, but in summary, America’s founders didn’t think it would be fair for the people in one state’s big cities to always decide the nation’s political questions (e.g., who would be president). So a complicated system was created that sought to balance population and state’s rights. In a national election, each state has “votes” in the Electoral College based on each state’s congressional representation (basically, by population). Thus, the votes of many small states can outweigh the votes of states with big cities (such as New York and California). As you can see from the map, LOTS of people in California voted for Mrs. Clinton–in fact, it was so many that she won more individual votes nationally than Trump. (In California, 8.75 million voted for Clinton; 4.48 million voted for Trump. Nationally, she won 2.9 million more votes than Trump.) Rarely can a person be elected President without winning either California or New York, but it happened in 2016–and you can see how many “red” counties were needed to outweigh the “blue” big cities. It doesn’t matter how many “popular votes” he or she wins, but a candidate needs 270 Electoral votes to win the Presidency. In 2016, Trump won 30 states (of 50), which gave him 304 Electoral College votes (compared to 227 Electoral votes for Ms Clinton).

You can find more in-depth explanations of the Electoral College on many other websites. (Here’s one I found recently.)

It’s interesting that the blue places on this 2016 election map are generally the darkest red on the 2020 Coronavirus maps (which again has to do with population density). 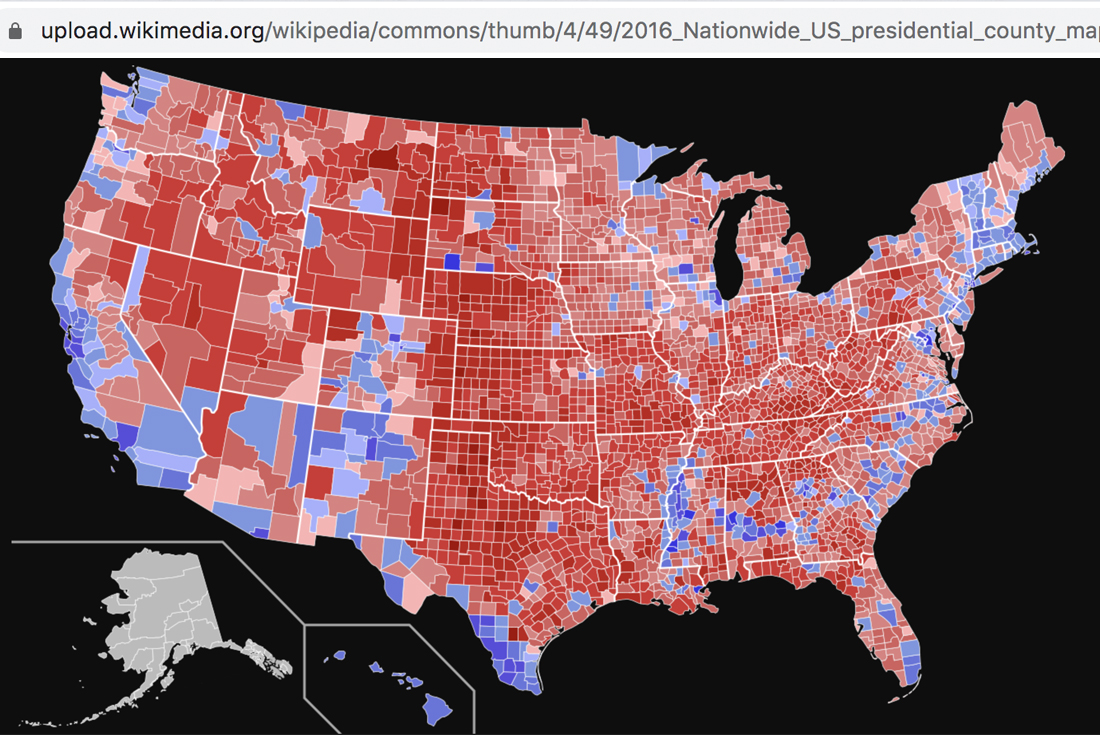 My final comment about the maps is that many international students are amazed that maps with this detail are freely available on the Internet. Their governments do not provide this kind of information about the choices/preferences of their people, and about health crises. In many countries, the citizens have no say in politics; in others, a select group of people can vote only for people in the ruling political party. Thus, it is astounding to read that Americans can easily change political parties, and that so many Americans don’t take advantage of their right to vote at all.

I think that Americans take for granted access to health and political information like this, as well as the right (normally) to freely move about and to meet with others—most of the world does not enjoy these freedoms, even in the best of times.

For my article about Fighting Fear of COVID-19, click this link.